ALABASTER – A 36-year-old Maylene man has been released from jail on a $10,000 bond after he was charged with allegedly selling methamphetamine in Alabaster. 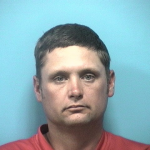 The Shelby County Drug Enforcement Task Force arrested Kevin Brian Sellers, who lists an address in the 30 block of Bluebird Drive in Maylene, on Nov. 4, and charged him with one felony count of unlawful distribution of a controlled substance.

Sellers’ charge came after he allegedly sold .30 grams of methamphetamine on First Avenue in Alabaster on Jan. 16, 2013. He was released from the Shelby County Jail the same day he was arrested after posting a $10,000 bond.

He is scheduled to appear in the Shelby County Courthouse on Dec. 17 for a preliminary hearing, according to court documents.

Unlawful distribution of a controlled substance is a Class B felony, according to Alabama law. If convicted, Sellers could face up to 20 years in prison.

Students cheer as their contraption they constructed kept an egg from breaking during the egg drop competition at the Science... read more