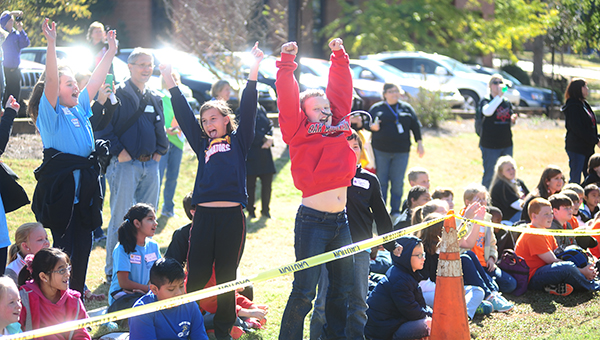 Students cheer as their contraption they constructed kept an egg from breaking during the egg drop competition at the Science Festival on Friday, Nov. 7. (Reporter Photo/Jon Goering)

MONTEVALLO–Gasps and looks of awe could be seen on the faces of nearly 250 fourth and fifth grade students from schools across the central Alabama region as the devices made for an egg drop competition were hoisted high in the air and dropped to see if the eggs were kept safe.

This was just one of the competitions held at The University of Montevallo for the inaugural science festival, where elementary students worked in teams to explore science concepts and study engineering designs to compete in competitions held on Friday, Nov. 7.

The University of Montevallo, Alabama’s Math, Science and Technology Initiative (AMSTI), and Shelby County Schools collaborated to bring the competitions to Montevallo for the first time, where they hope this will become an annual event.

Dr. John Woolard, who is in his fourth year working with AMSTI, helped lead the egg drop competition and other competitions throughout the day, and described some of the details of the competitions.

“So they spent the last hour designing their contraption and they didn’t know what materials they would have until they got here,” said Woolard. “They didn’t know what parameters they would be working within, and they had an hour to construct and had three different size containers their device had to be able to fit in. We’re going to take the bucket truck up and drop their eggs and see how they fare.”

Some of the other competitions included a bridge building and catapult launch according to Woolard. Students had to construct a bridge to support a load while only using paper and masking tape. The students then constructed catapults to launch items towards a target.

Woolard said he believes conducting events like these will help these students in the future and prepare them for college and career readiness.

“I think it’s vitally important and it’s something that we need to spend more time doing is working on building that foundation in the formative years such as in the elementary years,” said Woolard. “When they have this as a background, when they get to high school they are really prepared to do high school work and for selective colleges and careers.”