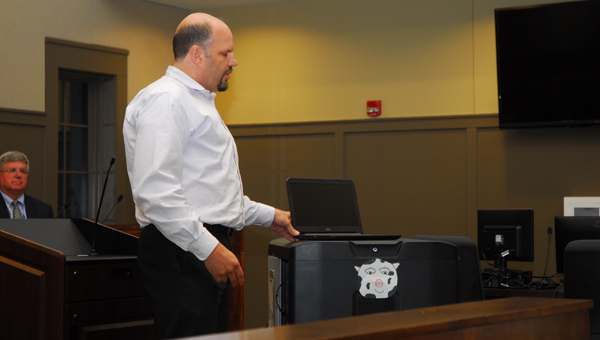 ALABASTER – Students in the Alabaster City School System soon will have greater access to technology, as the city’s Board of Education approved the purchase of 330 laptops for each school during a Nov. 10 meeting.

The School Board voted unanimously during the meeting to approve up to $300,000 to purchase 11 mobile carts containing 30 laptops apiece.

“We can start to move toward the 21st century technology we want,” Alabaster School Superintendent Dr. Wayne Vickers said during the meeting. “This is one of those exciting times to be a superintendent.”

ACS Technology Coordinator Keith Price showcased one of the mobile carts during the meeting, and School Board members even used the laptops to view documents they were voting on.

“This is something (Price) has been chomping at the bit to do,” Vickers said with a laugh.

Price said most of Alabaster schools’ computers are desktop computers, and said they often present logistical issues for teachers.

“These will give teachers the flexibility of not having to move kids in and out of classrooms all day to use computers,” Price said. “This is just the beginning of the vision we have for technology in our schools to meet the need of instruction. We are just doing technology for technology’s sake.”

Price said the laptop carts will particularly help during periods of standardized testing, as some tests are becoming more Internet-based.

Vickers said it likely will take between eight and 10 weeks for the laptop carts to be delivered. Thompson High School will have three carts, Thompson Sixth Grade Center will have one cart and the rest of the city’s schools will have two carts.

“This is an outstanding opportunity to have an immediate impact in our schools,” Vickers said.