ALABASTER – A 26-year-old Alabaster man is being held in the Shelby County Jail on bonds totaling $250,000 after he was charged with first-degree rape, domestic violence by strangulation or suffocation and second-degree unlawful imprisonment charges. 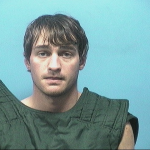 The Alabaster Police Department arrested Matthew Zachary Spain, who lists an address in the 1100 block of Windsor Court in Alabaster, on Nov. 8 and charged him with the three charges.

According to his arrest warrants, Spain’s charges stemmed from a Nov. 7 incident in which he allegedly “choked and strangled” a female victim. He also allegedly did “knowingly restrict and restrain” the victim against her will and allegedly did “engage in sexual intercourse with (the victim) by forcible compulsion,” according to his warrants.

In a court order filed with Spain’s arrest warrants, District Court Judge James Kramer identified the suspect as a potential flight risk, and set a higher-than-normal bond for the charges.

“The defendant has no substantial ties to the community, and may become a flight risk,” read Kramer’s order. “And considering the nature of the charges and possible contact with the victim, it is hereby ordered that the defendant’s bond be set as follows.”

First-degree rape is a Class A felony, and is punishable by up to life in prison upon conviction. If convicted of the domestic violence by strangulation or suffocation charge, a Class B felony, Spain could face up to 20 years in prison.

Second-degree unlawful imprisonment is a Class C misdemeanor, and is punishable by up to three months in jail.

As of Nov. 11, Spain did not have a future court date listed.