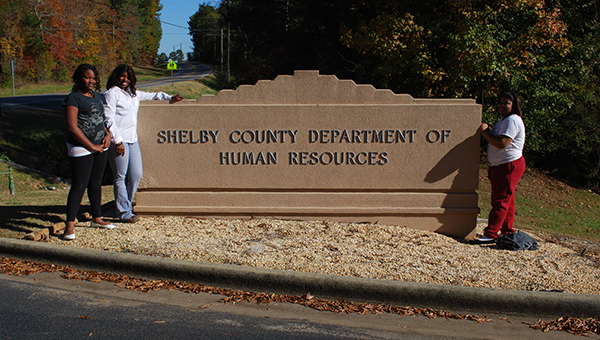 Bridgetta Taylor and her daughters made a visit to the SCDHR building on Monday, Nov. 10 where they surprised the staff with lunch. (Reporter Photo/Graham Brooks)

Big trays of food and pitchers of tea were brought in by Bridgetta Taylor and her two daughters to give to the SCDHR department in an act Taylor described as “just a chance to give back.”

Taylor has been the director of The Stand Up Youth Program in Columbiana, which helps mentor children and set their lives on track, since Oct. 6, 2012.

Taylor’s life is going well now because as she explained it, “I was saved by the grace of God,” but things haven’t always been so great in years past.

Taylor’s life was in shambles a few years ago to the point where the SCDHR removed her children from her custody for two months.

Taylor was trying to deal with an eating disorder, OCD as well as a serious gambling problem, she said.

Also in 2012, Taylor nearly lost her life to a painful nerve, temporarily keeping her from walking.

“In 2012, I almost lost my life to where I couldn’t even walk, and I’ll never forget when God came up on me and told me I was going to walk,” said Taylor. “From then on, when I got home from the hospital, they told my dad to get ready to call hospice because I wasn’t going to make it over the weekend. But when I went back to the doctor’s office they were looking at me like you’re a miracle.”

Taylor now has her kids back in her custody and wanted to extend her thanks to the SCDHR for helping turn her life around.

“They helped me change my life around to where I’m out here to let parents know that you can change your life and you can build on what you have made mistakes from,” said Taylor.

The Stand Up Program has grown since it was established two years ago, and Taylor is going to continue to help the youth and show that God can turn your life around even when you’re at your lowest point.

“The whole time I was running from God and he was trying to catch me,” said Taylor. “God has been so good and faithful and everything he said he was going to do for me he’s doing it, and I just want to give back everything that mankind has given me.”

Alabaster may ban parking in front and side yards

The Alabaster City Council is considering a ban on parking vehicles in the front or side yards of houses. (Contributed)... read more