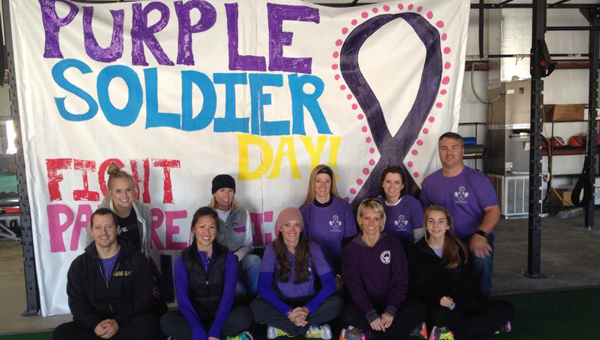 By Ginny McCarley/For the Reporter

“The goal is for people to say, ‘why is that purple?'” Dena Bedsole, organizer of the event, said.

Though this is the first year the city has participated in purple lights for pancreatic cancer, the city put up blue lights for autism in April and has worked to provide awareness to a variety of causes.

“If I can use my platform as mayor to bring awareness, I think that’s the least I can do,” Alabaster Mayor Marty Handlon said.

Bedsole, whose father died from pancreatic cancer in August 2011 just one year after being diagnosed with the disease, noted that though pancreatic cancer is one of the most deadly types of cancer, it receives very little funding.

“Pancreatic cancer statistics are really bad,” Bedsole said. “The five year survival rate is 6 percent, and by 2020 it will be the number two cancer killer, but it is the least funded. What I’ve done and what I’m doing is pocket change compared to what needs to be done.”

To kick off pancreatic cancer awareness month, Bedsole hosted the first annual “Purple Soldier Day” on Nov. 1, which featured a cross fit competitions as well as lunch and live music.

For Bedsole, life changed “incredibly” after she lost her father to the disease.

“It just kind of taught me that life’s not about me,” Bedsole said, and noted that she plans to continue to raise money and awareness for pancreatic cancer.

“I would love to see the community of Alabaster come together to fight (pancreatic cancer),” Bedsole said.

For Handlon, supporting causes like pancreatic cancer and other awareness programs “brings a sense of community” to Alabaster.

“It helps the community to know what’s here, to know what people are going through,” Handlon said. “That’s what makes a really strong community, knowing what we have here and how we can reach out and touch other people’s lives.”

By Ginny McCarley / For the Reporter ALABASTER-Alabaster Parks and Recreation Director Tim Hamm has been working with the department... read more