COLUMBIANA – A 19-year-old Alabaster woman is being held in the Shelby County Jail on bonds totaling $61,000 after she was arrested on several felony drug distribution charges on Nov. 12. 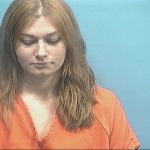 The Shelby County Drug Enforcement Task Force arrested Katherine Rose Miller, who lists an address in the 1000 block of Franks Circle in Alabaster, on Nov. 12 and charged her with six felony counts of unlawful distribution of a controlled substance and one misdemeanor count of second-degree possession of marijuana.

According to her arrest warrants, Miller allegedly sold several controlled substances at locations in Pelham, Alabaster and Birmingham over the past several months.

Her second-degree possession of marijuana charge came when she allegedly had a small amount of marijuana “for personal use” at her residence on Oct. 9.

Distribution of a controlled substance is a Class B felony. If convicted, Miller could face between two and 20 years in prison per charge.