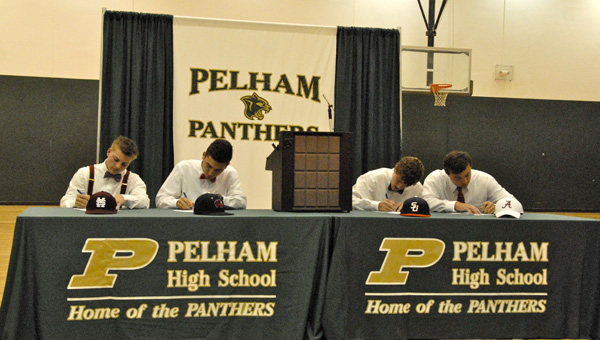 “It’s a big day for these guys and their families,” PHS baseball coach Sean Anderson said. “We as a school, program and community are very proud of them.”

Stovall will continue his career as a Mississippi State Bulldog. The PHS catcher committed to Mississippi State as a sophomore in January 2013, and he said he is looking forward to finally joining the team this coming fall.

Wilburn, a 6-foot-2-inch left-handed pitcher, signed with the Jacksonville State Gamecocks. Wilburn said the signing was a relief and he looks forward to his future as a Gamecock.

“I just fell in love with it, it felt like home,” Wilburn said of Jacksonville State and the Gamecock baseball program. “They saw a lot of potential in me.”

Radcliff will pitch for the Samford Bulldogs next year. He noted the coaching staff and the academics as important factors in his decision to sign with Samford.

“I’m looking forward to being with the coaches and with… the program, and also the academics,” Radcliff said. “You can’t beat the degree there.”

“It’s just an awesome feeling, it’s an awesome achievement,” Finnerty said of signing with Alabama, adding he is looking forward to the “brand new field” which should be ready for the 2015 baseball season.

PHS administrators expressed pride in the four seniors’ accomplishments both on the baseball field and in the classroom.

“Any time you can get your kids to excel in the classroom and on the field, it says volumes for what kind of school Pelham High School has been and is going to be,” Principal Dr. Jason Yohn said.

“I think it says a lot about those kids, they’ve worked extremely hard,” Anderson said.