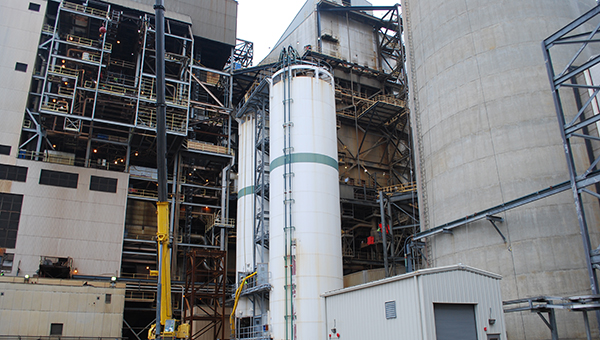 The ongoing projects at the E.C. Gaston Steam Plant in Wilsonville will have labor impacts as well as energy cost impacts in the future. (Reporter Photo/Graham Brooks)

WILSONVILLE–A host of environmental regulations put in place over the past couple years will force Alabama Power to spend a billion dollars to comply with the federal mandates, and one of those plants undergoing change is the E.C. Gaston Steam Plant in Shelby County.

The projects have been ongoing since 2011, and the unit five baghouse project is not scheduled to be completed until March 2016.

“People generally don’t understand the complexity of generating electricity, but it can be pretty complicated and it’s a huge capital investment,” Alabama Power spokesman Michael Sznajderman said. “These projects are all drawn out and planned years ahead of time.”

One of the main consequences of the gas conversion projects is that there will be a reduction of close to 90 jobs through attrition at the Wilsonville plant. Sznajderman explained that when you burn natural gas and convert coal-fired units into natural gas that there is no longer a need for as many workers, but due to the projects, the chances of an increase on your energy bill is imminent.

“There’s no question it will have real cost impact on customers,” said Sznajderman. “We haven’t had a rate increase in three years but it depends on where regulations come from and how strict they might be.”

The unit five baghouse project will use 3,500 tons of structural steel, 6,650 cubic yards of concrete and 1.18 million feet of cable. 400 contractors have already been working on-site since the introduction of the project.

The conversion of the four coal-fired units into using natural gas will cost about $181 million, while a project to install heavier environmental controls on its remaining coal-burning unit will cost a little more than $401 million.

The Gaston Plant has the ability to serve the energy needs of more than 840,000 homes and sits on 1,450 acres.

Plant Manager Brian Heinfeld added that the employees of the Gaston plant take pride in what they do and bringing electricity to the millions of homes in Alabama.

“We have no choice but to meet these challenges but folks who work here take great pride in providing energy and it becomes a big part of giving back to the community for them,” said Heinfeld.