Eagles’ season ends in second round of playoffs 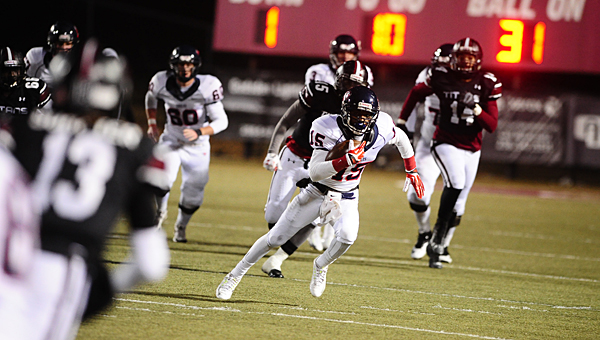 Oak Mountain’s Evan Benison (15) sprints for a first down during the Eagles’ 45-28 loss to Gadsden City in the second round of the 7A playoffs on Nov. 14. (Reporter Photo/Jon Goering)

GADSDEN – The Oak Mountain Eagles were unable to overcome a pair of early turnovers on the road at Gadsden City Nov. 14, falling to the Titans 45-28 in the second round of the Class 7A playoffs.

“They came out much better-prepared than we were to start the ballgame,” Oak Mountain head coach Chris Bell said, noting he was “extremely” proud of his team for finishing the season at 10-2. “These guys have done an awful lot. This senior class has been remarkable. They believed in themselves when nobody else did, and I’m real proud of them.”

Oak Mountain started the game strong when the Eagles’ Christon Taylor intercepted a Titans pass on the first drive of the game. After Oak Mountain was forced to punt, the Eagle defense held the Titans on fourth down deep in Oak Mountain territory.

On the Titans’ next possession, a fake field goal led to a touchdown, putting the home team up 7-0 midway through the second quarter.

Oak Mountain fumbled the ball on its next two possessions, leading to 10 Gadsden City points before halftime.

The Titans added to their lead midway through the third quarter to take a 24-0 lead with 6:31 remaining in the quarter.

The Eagles’ first touchdown came when Harold Shader powered into the end zone from two yards out. Logan Webb’s PAT split the uprights to bring the game to 24-7.

Oak Mountain further closed the gap on the first play of the fourth quarter when Harold Shader again ran the ball into the end zone from two yards out. Webb’s extra point brought the game to 24-14.

After another Titan touchdown, Oak Mountain answered when Daniel Salchert scored on a six-yard touchdown run. Webb’s PAT again brought the Eagles within 10.

The Titans put the game to bed by reeling off 14 unanswered points before Salchert and Webb scored the final points of the night on a three-yard run and extra point, respectively.