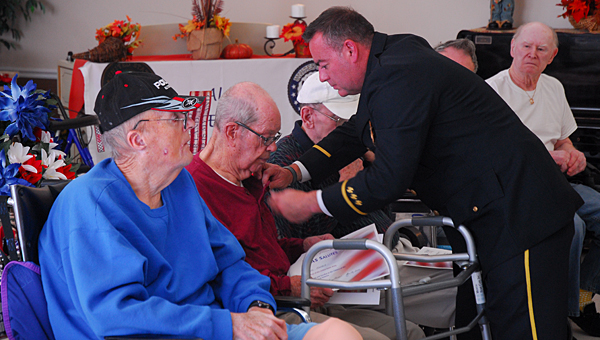 ALABASTER – Pelham Fire Department Capt. Chris Carpenter, a US Army veteran, knows firsthand the sacrifices necessary to maintain the nation’s freedom, and knows the importance of the military foundation laid by his predecessors.

“In one way or another, we all ended up in service to the United States of America,” Carpenter told a group of five veterans at a Nov. 14 ceremony at Alabaster’s Shelby Ridge and Rehab Select nursing home. “Most of us were just kids when we went in, and we didn’t know what we were getting into. We saw some things we never want to forget, and we saw some things we may not want to remember.

“We are fortunate for the guys who served before us,” Carpenter added. “The tradition continues. Y’all passed it to us, and we passed it on to another generation after us.”

During the ceremony, which was sponsored by Vitas Health Care, Carpenter and several other military veteran Pelham firefighters saluted the six veterans who live at Shelby Ridge.

“We could not be here today if it weren’t for the sacrifice of these men,” Vitas Veteran Liaison David Rodgers said. “You are truly the pinnacle of our society.”

Although he served the country in the military, Carr was quick to cast the spotlight on the firefighters who were in attendance at the ceremony.

“I want to thank the fire departments here and all around the country for all they have done, especially since September 11,” Carr said.