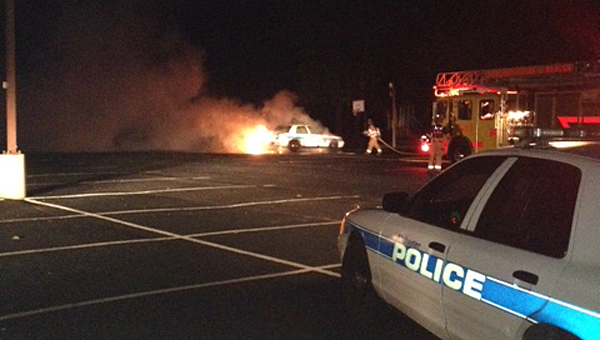 The Alabaster Police Department is still investigating a vehicle fire involving one of its patrol cars. (File)

ALABASTER – The Alabaster Police Department is continuing to investigate a case of arson involving one of its patrol cars, and is asking for the public’s help in solving the crime.

At about 12:30 a.m. on Sept. 9, the department received a report of one of their patrol cars burning in the parking lot of a church on Alabama 119. When officers arrived on the scene, they discovered a Ford Crown Victoria patrol car engulfed in flames.

At the time of the incident, Alabaster Police Chief Curtis Rigney said it appeared the vehicle was set on fire intentionally, and said the vehicle was a total loss. The patrol car was issued to Meadow View Elementary School resource officer Jamison Lee, and many of his personal belongings were destroyed in the blaze.

Although the police department’s insurance helped the department with replacing the vehicle, several of Lee’s personal belongings in the vehicle when it was set on fire were not covered.

When she heard of the incident, MVES first-grade teacher Michelle Martin organized a faculty fundraiser to help Lee replace his items lost in the blaze.

On Nov. 18, Rigney said the department was still actively investigating the incident and was following up on leads, but had not yet made any arrests in the case.

Anyone with information on the incident is encouraged to contact the department at 663-7401.