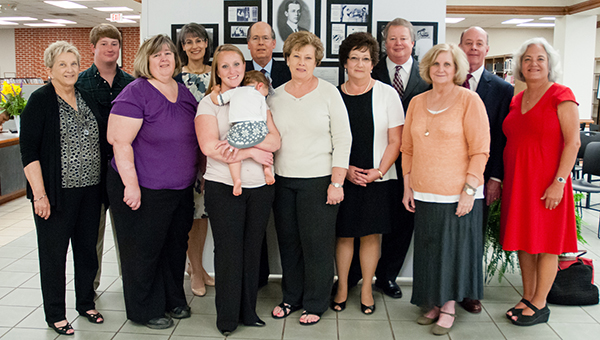 Generations of the W.M “Mack” Wyatt family gathered at the University of Montevallo’s Carmichael Library for a donor event marking the addition of the W.M. “Mack” Wyatt Digital Archive to the library’s offerings. (Contributed)

MONTEVALLO–University of Montevallo’s Carmichael Library recently received a gift that the entire community of Montevallo will have a chance to enjoy for quite some time.

A donor event was held on Oct. 17 to introduce the W.M. “Mack” Wyatt Digital Archive to add to the library and offer some historical background that will serve as a repository for archived newspapers printed in Montevallo and Shelby County, particularly during the late 19th and early 20th centuries.

Clay M. Nordan, a 1976 graduate of the University of Montevallo, was the main donor for the digital archive, which holds a special meaning to him.

The archive is named for Nordan’s grandfather, Mack Wyatt, who was born near Clanton in Chilton County in 1892.

“I decided to fund and support the creation of this special local newspaper archive as a way of preserving my grandfather’s life’s work,” said Nordan. “In addition, to locate and read this invaluable record of life in Montevallo and Shelby County in the mid-20th century has been difficult at best for the general public until now.”

The intent of the archive is to preserve for posterity the newspapers published by Wyatt during his time in Montevallo and to make them available to the public. Any and all other newspapers that have been published in Shelby County will also be included in the digital archive.

Nordan and his Grandfather have both spent their entire working careers in printing and publishing.

Nordan spent 32 years at Southern Living magazine, retiring as Managing Editor in 2008 while Nordan’s Grandfather began his newspaper career as a typesetter and printer in 1907 at the age of 15. Wyatt continued his work in the newspaper business, as an editor and an owner, including associations with the Union Banner newspaper in Clanton, the DeKalb Herald in Fort Payne, the Montevallo Times and the Calera Herald. The latter two publications were merged to become the Shelby County Times-Herald in 1954 and were published until 1959, when Wyatt sold the publication to the Shelby County Reporter.

Gary Johnson, director of comprehensive campaign works in university advancement, worked closely with Nordan to help start the digital newspaper archive and believes it will be a positive thing for the university and community going forward.

“People can use the old newspapers as archives and go back and look for things,” said Johnson. “In that time period, newspapers were a primary way to get news and at the time it was great for community connectivity. This will be great for our community and will be a great way for people to see what was going on back then.”

The archive can be viewed at montevallo.edu/academics/library/w-m-mack-wyatt-digital-archive/.