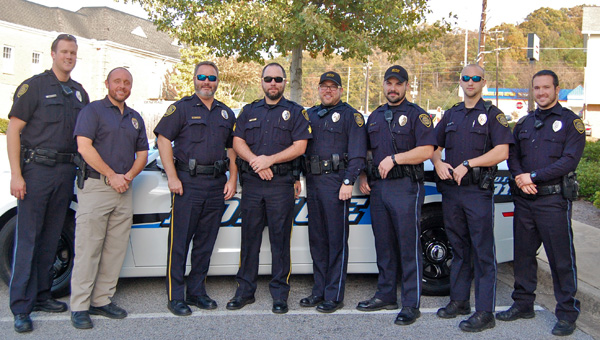 The Pelham Police Department, along with the Alabaster and Helena police departments, have been raising awareness and money for the Wings of Hope Pediatric Foundation through No Shave November. (Reporter Photo / Molly Davidson)

PELHAM—With the month more than half over, No Shave November is still going strong at the Pelham Police Department.

“We have a spreadsheet (to keep track) of the beards,” Pelham Police Officer Mike Williams added with a laugh.

The Wings of Hope Pediatric Foundation provides assistance to families of terminally ill children through services such as house cleaning, preparing meals and financial assistance. Willingham helped to found the organization after losing two children to Spinal Muscular Atrophy Type 1.

“We’re giving these families time to focus on what’s important, and that’s their child,” Willingham said.

In addition to the $50 donated by each police officer participating in No Shave November, local businesses, including Vulcan Threaded Products and Reed Landscaping, and individuals have also donated to the cause, Lott said.

The three police departments are collecting donations and selling specially-designed No Shave November shirts. All the proceeds will be pooled and presented to the Wings of Hope Pediatric Foundation during a Dec. 1 celebration at Buffalo Wild Wings in Alabaster, Lott said.

“One hundred percent of what they’ve raised goes to these families,” Willingham said, noting the foundation is currently assisting five families.

The Dec. 1 celebration will kick off around 6 p.m. and a beard-judging contest will begin around 7 p.m., Willingham said. Judges will include several of the children Wings of Hope Pediatric Foundation works with. Additionally, Buffalo Wild Wings will donate a portion of the night’s proceeds to the organization, Willingham said.

The Alabaster Police Department has charged a Birmingham man with a burglary and damages to the Cedar Grove Holiness Church... read more