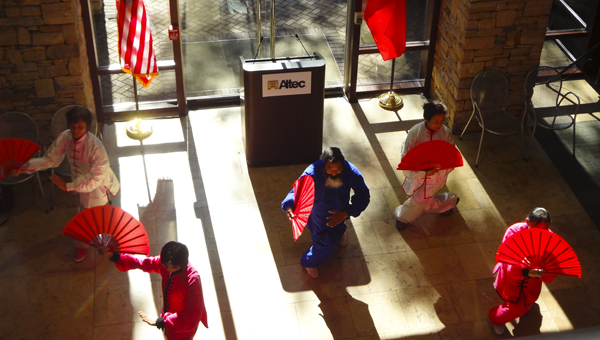 NORTH SHELBY–Adults and local schoolchildren learned about Chinese culture Nov. 21 at Altec Inc. in Inverness as the Birmingham International Center announced China as its 2015 Spotlight country.

The BIC spotlights a different country each year and produces programs and activities designed to build greater cultural understanding, according to a media release. The 2015 Spotlight on China will bolster cultural, educational and business ties between Alabama and China.

“Every year, they look for a sponsor, and Altec is this year’s main sponsor,” Altec Worldwide Managing Director Scott Wilson said. “China, for us, was an obvious choice because we do business in China, and I feel like China is such an emerging part of the world.”

Yang Song, Consul for Cultural Affairs from the Chinese Consulate General in Houston, spoke to the audience about the importance of BIC choosing China to spotlight.

“It’s a great pleasure for me to be here with you,” Song said. “I highly appreciate the initiative given by Altec and the Birmingham International Center.”

Seven students from Inverness Elementary, members of the local Chinese community and representatives from the Alabama Department of Commerce attended the event.

“We really want students to have a good experience with this,” Wilson said, and noted the BIC reached 23,000 students last year through its programs.

After Song and others gave remarks on the 2015 Spotlight, the Taichi Fans of Birmingham performed a Chinese Taichi Kungfu Fan Dance.

“It was good,” Inverness Elementary third-grader Sean James said of the performance, adding that his favorite part was “when they popped the fans.”

James said he is looking forward to learning about different types of buildings in China.

“A program like that carries across language barriers,” Welch said. “I think what it is doing is fantastic in bringing people together.”

Welch said the BIC’s Spotlight produces a “better understanding of cultures” and helps people develop “a greater appreciation for each other’s differences.”

“I am very impressed with what they’re doing,” Welch said. “I just think it brings people together. There are a lot of ways we’re different, but then, in many ways we are the same.”

Oak Mountain’s Harold Shader breaks away from the James Clemens defense as teammates celebrate in a comeback win in the... read more