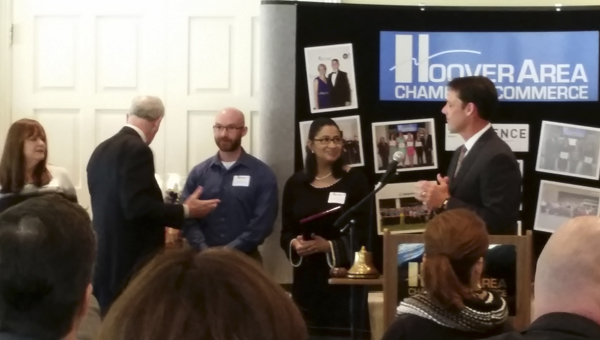 Dena Fore (fourth from left) was named the Hoover City Schools Employee of the Year for 2014-2015 on Nov. 20. (Reporter Photo/Emily Sparacino)

HOOVER–Dena Fore was named the 2014-2015 Hoover City Schools Employee of the Year at a Hoover Area Chamber of Commerce luncheon on Nov. 20.

Fore is a human resources analyst and has worked in the Hoover City School System for nine years.

The award has been presented since 1996 and focuses on the administrative and support personnel throughout the school system.

Since teachers have their own statewide recognition program each spring, they are not included in the program.

The winners of the Employee of the Year award are given an engraved plaque, and their name is engraved on a plaque in the administrative office lobby at the Hoover Board of Education.

Craig also gave a “State of the School System” address at the luncheon.

“We’ve tried to stay well-positioned through the years,” Craig said as he referenced the economic downturn that hit several years ago. “I’m very proud we’ve been very agile, and very adaptive, as an organization. The success of this organization is rooted in this community.”

Craig recently accepted a position with the Alabama Department of Education to be the new deputy state superintendent of administration and finance after he resigns as Hoover’s superintendent.

“When I came here, it was a leap of faith for my family,” he said. “It’s been an incredible, rewarding 13 years in Hoover. I’m going to take a leap of faith in a couple months. I’ve always said this is a people business, and we’ve got the best in Hoover.”

VES students give thanks for freedom, family and friends