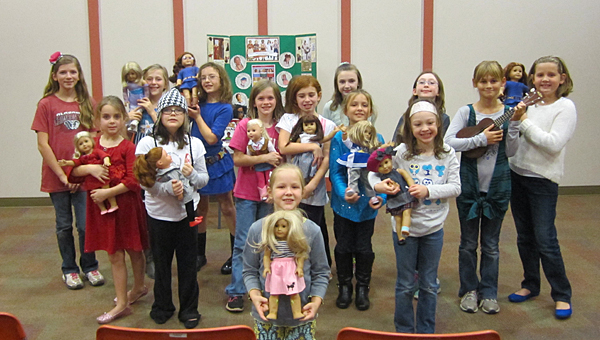 ALABASTER—Almost 20 girls, accompanied by their American Girl dolls, celebrated their unique talents during the Nov. 21 meeting of the American Girls Club at the Albert L. Scott library.

Frances Smith, youth services librarian and organizer of the club, said the group meets approximately once a month. During each meeting, the girls study one of the American Girl dolls and discuss the story behind the character.

“We usually take one character and learn about their world and do activities inspired by that,” Smith explained.

During the November meeting, the girls began by discussing the world of Isabelle, the 2014 Girl of the Year, who is a dancer who discovers the talents of her friends. Then, each girl had a chance to perform her own special talent.

The girls showcased a number of talents, including singing, dancing, painting and gymnastics.

“I liked seeing the people hold up the art that they did,” Addison Edwards, who attended with her doll Addie, said.

After the girls finished performing, Smith pointed out a number of books available at the library about monologues, dance and music, which would help the girls develop their skills.

“If you want to develop your talents, you can come to the library,” Smith told the group.

For the parents, the monthly club is a place where their girls can come, play and explore their unique talents.

“It’s just a good place for (the girls) to learn how to be good quality little girls without having to grow up too fast like society wants them to,” Ginger Edwards, mother of Addison Edwards, said.