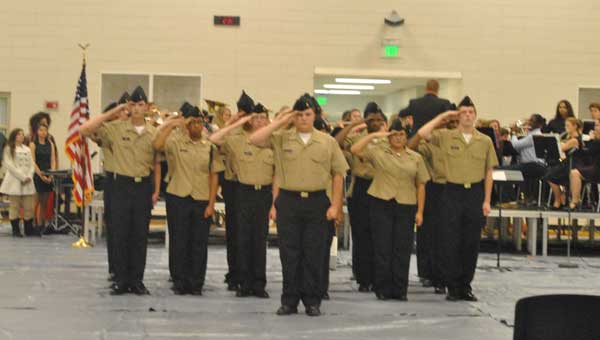 By Aubrie Smith/For the Reporter

CALERA – Every year Americans get the chance to show their appreciation to veterans and to pay respects to those fallen soldiers that fought for the country’s freedoms. Many students and teachers have family and friends that have fought or are fighting for our country.

The students, faculty and community of Calera High School held its annual Veterans Day program on Nov.13. The program was led by the school’s SGA, band, and choir and included patriotic musical selections, a history of Veterans Day, a slide show featuring family members of students and staff who have served, and recognition of local veterans in attendance.

When asked what Veterans Day means to him, Senior Cooper, CHS Spanish teacher, replied, “It is the time I get to stop and appreciate our freedoms and remember family and friends who served.” He went on to say,” It reminds me of how glad I am to have my son home from Afghanistan.”

Coach Chris McCrackin, who teaches history and is a veteran himself, was asked which veteran has had an impact on his life.

“The veteran who has had a large role in my life is my grandfather who served in World War Two, Korean War, and Vietnam,” he replied.

Coach McCrackin sees great benefit to the students from opportunities to host such a program.

“It reminds them that what they have isn’t free, and that someone had to fight and die for their freedoms; they need to take pride in that,” he said.

When asked about their perception of Veterans Day, Calera High School students Braxton Stokes and Bethany Rogers said they both feel honored to recognize those men and women locally who have served.

“The veterans have given so much for our country, and it was great having the opportunity to recognize those in our community,” Stokes said.

“Without Veterans Day we wouldn’t be able to express our gratitude to the veterans in our community; it allows us to stop and helps to humble us and take pride in our nation’s soldiers,” Rogers added.

SFC Christopher R. Smith, who now serves as a member of the Calera Police Department, said he feels it is important for students to honor those who have served, especially those members of their own families and community.

“Being a veteran means being someone that is willing to sacrifice him or herself to fight against evil so that others may live free,” he said. “There really is no greater honor. I say this because Veterans Day honors those past and present military persons’ willingness to defend freedom.”

Calera High School’s principal Joel Dixon added that the three-year-old tradition at CHS is one he hopes to see continue to grow.

“We have had a project going on here for the last seven years of taking kids out to rake leaves and clean up the yards of veterans here in our community,” he said. “We did that on Monday (Nov. 10th). Thirty-eight students and nine staff members spent time giving back. That’s always a good thing!”

He went on to say, “This is a simple act of service, a way kids can get their hands in the dirt, literally, and give back. Adding a formal recognition adds a second important element. Ceremony is important. It builds tradition and tradition is important.”

Aubrie Smith is a senior at Calera High School.

VES students give thanks for freedom, family and friends