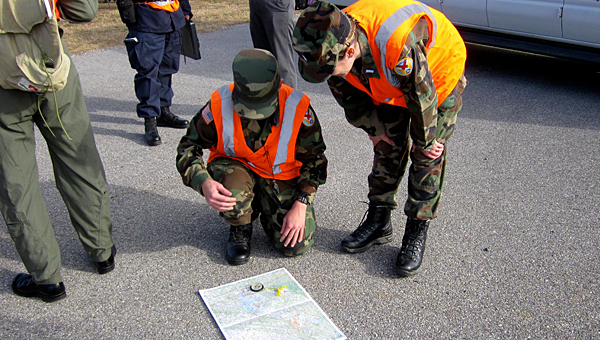 Members of the Civilian Air Patrol prepare to conduct a search and rescue operation at the Shelby County Airport on Nov. 22. (Contributed/Ginny McCarley)

CALERA – Despite rainy weather, approximately 50 members of the Alabama Wing of the Civil Air Patrol searched for downed planes using aerial, ground and urban search and rescue techniques as part of a practice mission held at the Shelby County Airport Nov. 21-23.

CAP, the official auxiliary of the United States Air Force, is a nonprofit organization that provides emergency services, cadet programs and aerospace education.

During the exercise missions, the planes searched for practice beacons, which simulated downed aircraft. Then, ground teams went to the coordinates sent by the plane to find its exact location.

“If a plane goes down in the woods, we’ll fly it and get a general location then we’ll launch a ground team,” said CAP 1st Lt. Jamie Oliff.

The process of finding a downed aircraft “starts as a science and ends as an art,” Harvey Yarborough, director of emergency services for the Alabama Wing of CAPS, explained.

The team trains in interview techniques, urban direction finding and mission management, among other things, during the three-day exercise.

“We have a mission, and we use volunteers and then we train them to do these things. Today we’re demonstrating training that has already happened,” Yarborough said.

“It’s a way of practicing a real-life scenario,” Hale explained.

For many members, CAP is a way to combine a passion for flight with a desire to serve the community.

“There’s a purpose for getting a (pilot’s) license. You can use it to serve your community,” said Oliff, who also spends time in Alabaster City Schools using flight as a teaching tool for science and math.

CAP also runs a cadet program, open to ages 12 through 21, which introduces young people to aviation.

For Evangela Culiguire, an 11th grader with the Redstone Composite squadron, the experience will help in her goal to become a missionary pilot.