ALABASTER – A 31-year-old McCalla woman is being held in the Shelby County Jail on bonds totaling $17,000 after she allegedly used heroin while she was pregnant. 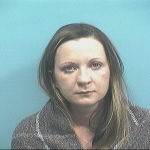 The Alabaster Police Department arrested Amanda Nicole Lawley, who lists an address in the 20000 block of Becky Road in McCalla, on Nov. 19 and charged her with one felony count of chemical endangerment of a child and misdemeanor charges of possession of drug paraphernalia and third-degree theft of property.

According to Lawley’s arrest warrant, Lawley’s chemical endangerment charge came after she allegedly exposed her unborn child to a controlled substance by “ingesting or injecting heroin” while she was pregnant. The warrant lists a Nov. 19 offense date.

Chemical endangerment of a child is a Class C felony. If convicted of the crime, Lawley could face up to 10 years in prison.

Diane Link Columbiana Diane Link, age 63, of Columbiana, passed away on Friday, Nov. 21. She was a weather observer... read more