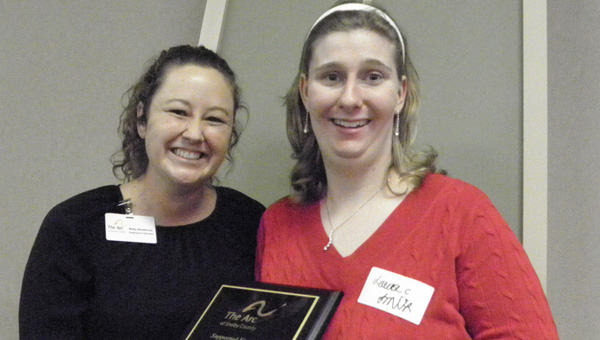 The Arc of Shelby County offers services and programs to individuals with developmental disabilities and delays and their families at each stage of life, from early intervention to employment support programs.

Doctor Charlie Law and the YMCAs of Pelham, Alabaster and Greystone were recognized with the 2014 Distinguished Community Service Award.

Laura Smith and Tim Trobaugh were recognized as the 2014 Supported Employees of the Year. Both were commended for their positive attitudes and strong work ethic.

National Seating and Mobility and Easter Seals were honored as 2014 Community Partners of the Year.

Daniel Wyatt was honored with the 2014 Family Service Award for several volunteer building projects he completed for the Arc of Shelby County. The Gonzalez family was recognized as the 2014 Family of the Year for their continued support and work in the Early Intervention program.

Matthew Graves was named the 2014 Volunteer of the Year.

Shelby County Schools jobs coach Cindy Vinson and Laura Culpepper of Culpepper Family Child Care were honored as the 2014 Professionals of the Year.

Kirby Henderson, Arc of Shelby County employment specialist, was named the 2014 employee of the year. Joni Quattlebaum and Brandi Osbourn were recognized as 2014 Teachers of the Year.

Project SEARCH job coach Kim Kielbasa was honored with the 2014 Innovative Service Award for her work with Angel Art, creating an interview-appropriate clothing closet for Project SEARCH students, coordinating volunteer opportunities with Habitat for Humanity, to name a few.

Stokes noted the importance of community support to the Arc of Shelby County in allowing the organization to make a “much greater impact.”

“We know no agency can make it alone,” Stokes said. “Our families don’t come in with just singular needs.”