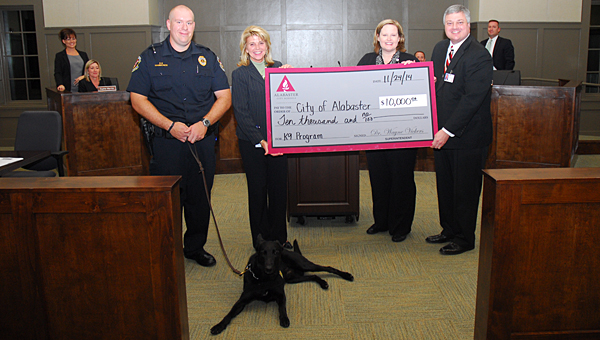 ALABASTER – The Alabaster Police Department’s only four-legged employee will have a greater presence in the community and in the city’s schools thanks to a $10,000 donation from the Alabaster City School System.

ACS presented the donation to the police department during a Nov. 24 City Council meeting, covering much of the expense of purchasing and training Micco, the department’s new Belgian malinois K-9 officer. Micco is the first K-9 officer the department has had in nearly 20 years.

“Last Friday was two weeks on the streets. He’s done real well in his training,” Micco’s handler, officer Hunter Hammonds, said of the K-9, noting he is looking forward to the dog’s first drug bust. “He knows everything that’s going on.”

Micco, who is about 2-and-a-half years old, was named through a Facebook naming contest the police department conducted in September.

The list of the dog’s possible names all had Native American ties to reflect the city’s Warrior spirit. When the votes were counted, the vast majority came in for Micco, which means “Chief” in the Seminole language.

Alabaster School Superintendent Dr. Wayne Vickers said the school system was happy to partner with the police department, and said Micco will have a regular presence in the city’s schools.

“We appreciate the wonderful cooperation we have with the police department,” Vickers told City Council members during the meeting.

“We came to him with the idea, and he said ‘Let’s do it,’” Tanner said of Bedsole.

Bedsole said Micco, who attended the Nov. 24 council meeting, will be an asset to the city’s police and schools.

“It’s a great partnership, because we can have the dog on the streets and in the schools,” Bedsole said.