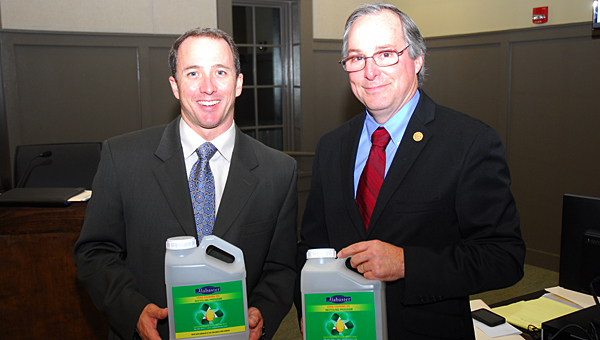 ALABASTER – Those looking to dispose of used cooking grease from the holiday season will have an easy and environmentally friendly chance to do so through Alabaster’s grease recycling program.

The city recently received 1,000 plastic jugs to distribute to residents, and passed them out to those in attendance at a Nov. 24 City Council meeting.

Through the program, the city will make the jugs available to Alabaster residents, who can then fill them with used cooking grease and return them to the city’s Environmental Services Department for recycling.

The City Council voted in late September to approve the city’s 2014-2015 fiscal year budget, which included funding for the grease recycling program.

“We are going to try it out and see the interest of people in returning their used oil and grease,” Alabaster Mayor Marty Handlon said of the initial 1,000 recycling jugs. “Hopefully, it will take off in our community.”

After the city collects the used grease and oil, the oil is then run through a pair of oil-water separators before it is fed to a biodiesel processor.

Once the processor creates biodiesel, it will then be mixed with regular diesel fuel to power backhoes, tractors and other diesel-powered equipment used by the city’s fleet. The fuel cost savings will allow the city to use more money toward other services and projects, City Council members said previously.

Walters said the grease recycling program will help the city meet federal water purity guidelines to be enacted in 2020.

To request a grease recycling jug, or to learn more about the program, call Alabaster City Hall at 664-6825 or use the “Report a concern” link on the Cityofalabaster.com home page.