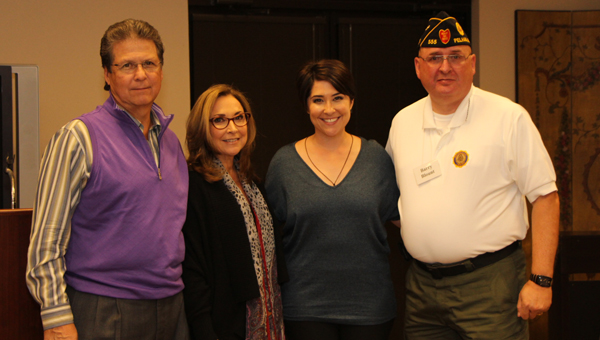 The Hernandez family made a donation in memory of Pelham native and military veteran Matthew Blount to Pelham’s American Legion Post 555. (Contributed)

PELHAM—Pelham’s American Legion Matthew Blount Post 555 recently received a financial boost from a donation given in memory of the post’s namesake.

A Pelham native and military veteran, Matthew Blount passed away in March 2012 after battling cancer and leukemia. A close family friend of Matthew Blount’s, the Hernandez family made a donation to American Legion Post 555 in his memory.

“He served everyone to the utmost ability in everything he did… He emulated so much strength and brightness,” Nicole Hernandez said. “We wanted to show our support for Matt and keep his name alive, and we wanted to show support for the American legion itself.”

After attending several of the organization’s meetings, Hernandez said she and her family were encouraged by Post 555’s members and their commitment to educating the youth.

“They’ve equipped themselves with a really great group of veterans,” Hernandez said, noting Post 555’s goal to “help these young men and women to develop a character (of) dignity, integrity and respect.”

Matthew Blount’s father and Post 555 Commander Barry Blount said the organization hopes to use the donation to kick-start several youth programs, including upcoming oratorical competitions and a summer baseball team.

“Our main objective right now is the oratorical (competition) coming up,” Barry Blount said. “Boys’ State and Girls’ State are coming up this summer, we’re going to try and send one boy and one girl.”

The American Legion holds annual local, state and national oratorical contests for students and the Girls’ and Boys’ State program that educates high school students on the American government. Students can win scholarship money through these programs.

“We want to recognize and help our youth,” Barry Blount said. “We’re creating these doors for them.”

American Legion Post 555 meets the first Thursday of each month at the Pelham Senior Center at 7 p.m.

The Alabaster City Council agreed to annex several pieces of property in the northern sector of Saddle Lake Farms during... read more