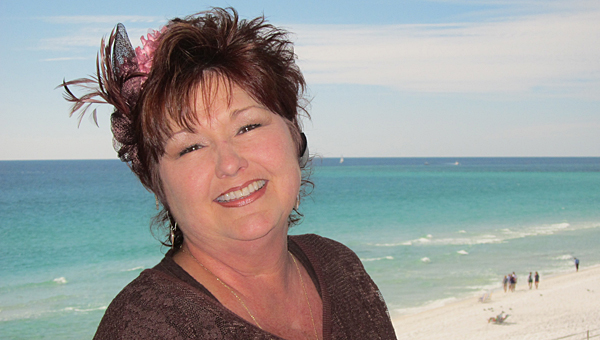 “She who leaves a trail of glitter is never forgotten” aptly described Joyce Reach Smith. This saying was “pinned” by daughter Kelly Pitts to her Pinterest board more than a year ago when she saw the saying and immediately thought of her mother. Little did she realize that this saying would mean so much about a year later. Joyce, age 60, died November 30, 2014, after a short but valiant seven month battle with lung cancer.

A beautiful woman, inside and out, Joyce was Miss Dream Girl at Thompson High School, class of 1972. She was devoted to husband Bill who retired from the United States Air Force after 21 years and then opened Bill’s Custom Framing in Alabaster.

Bill and Joyce both loved motorcycles, riding for the Pediatric Brain Tumor Foundation. They traveled to the Grand Canyon, he on his two wheels; she on her trike. Joyce won first place at the World of Wheels for her Swarovski hand-decorated trike with more than 80,000 crystals that she personally glued. Even her helmet had a tiara glued on top!

Joyce and Bill, with her mother Faye, moved to Columbiana after falling in love with a mini-farm on Highway 47. Joyce envisioned her twin granddaughters swimming in the pool and playing with farm animals. The house and land would be a respite for the trying days ahead.

Joyce, along with her sister, Lois Cooper, were active members of the Vignette Club where they both drove their convertibles in the Liberty Day Parade. Joyce’s car will still be driving in the Columbiana Christmas Parade on Dec. 4.

Joyce Smith has left a huge trail of glitter in this world and will never be forgotten. Glitter is flowing in heaven today.