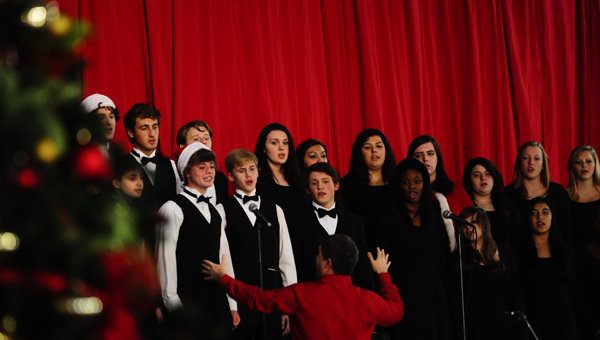 PELHAM—Thousands filled the Pelham Civic Complex and Ice Arena and watched as skaters twirled to music played by the city’s students and Carly Chandler lit the Christmas tree during the annual Christmas tree lighting ceremony. 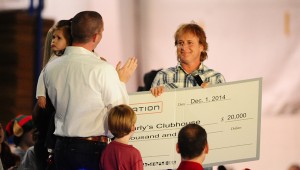 The Pelham Christmas tradition began as a gathering in front of City Hall and was moved to the Civic Complex and Ice Arena as attendance grew. This year’s event was attended by numerous city residents as and elected officials, including the Pelham City Council, Board of Education, Sheriff-elect John Samaniego, Alabama’s District 6 Senator Gary Palmer, R-Homewood and State House District 73 Representative Matt Fridy, R-Montevallo.

“Most people are searching for great joy… we can always find joy in the Lord,” Parrish said. “I hope this Christmas, you can find your great joy in Jesus Christ.”

Attendants were treated to musical performances by Pelham City Schools students accompanied by choreographed routines by skaters from the Pelham youth hockey team, the Pelham Skate School and the Birmingham Figure Skating Club.

The Pelham High School Jazz Ensemble wrapped up the performances with a rendition of “All I Want for Christmas is You.”

Each year, the city’s Christmas tree is lit by a special guest. This year’s guest was Carly Chandler. The daughter of Pelham police officer Dustin Chandler, 3-year-old Carly Chandler suffers from CDKL5, a rare seizure condition. She was the inspiration behind Carly’s Law, signed by Governor Robert Bentley in April, and Carly’s Clubhouse, an all inclusive playground to be built in Pelham City Park.

“Hopefully (Carly) is going to serve as an inspiration to people,” Dustin Chandler said as he helped Carly light the Christmas tree. “From my family to everyone in here, God bless you and merry Christmas.”

The program concluded with a surprise donation to Carly’s Clubhouse. Patrick Boone, general manager at Live Nation, presented Dustin Chandler with a $20,000 check for the all-inclusive playground project.

“I heard about the story of Carly’s Clubhouse, and it just touched my heart,” Boone said. “This is a great, great project. This is a great community asset to have here.”