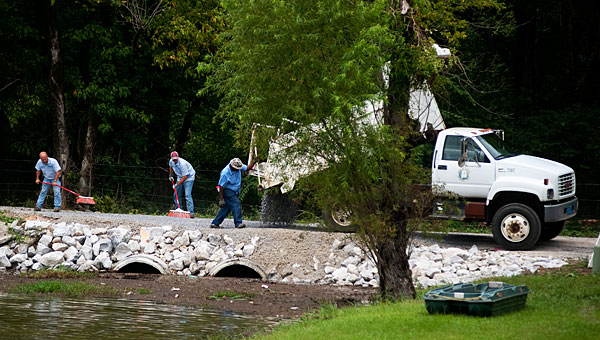 Workers repair flood damage to Shelby County 261. The Pelham City Council approved the purchase of five properties along Shelby County 261 for a project to combat flooding in the area. (File)

PELHAM—Pelham is moving forward with a more than $1.5 million project to combat flooding along Shelby County 261. The City Council approved a resolution to purchase five properties on the highway during a Dec. 2 meeting.

The city purchased each of the five properties at their “most recent appraisal value” coming to a total of $655,350, Pelham City Council President Rick Hayes said.

The property acquisition is the first phase of the more than $1.5 million flood mitigation project that will stretch from a retention pond in Helena along Shelby County 261 into Pelham. The project will attempt to alleviate flooding in neighborhoods along Shelby County 261 by deepening and adding a system of retention ponds to better hold storm water.

The entire project is estimated to cost nearly $1.7 million, 75 percent of which will be covered by the Federal Emergency Management Agency.

The city was approved for a $1.237 million grant from FEMA to fund the project in May.

“The money for the project has already been approved, we have already funded this project,” Hayes said, explaining the entire project has been accounted for in the city’s budget.

Residents of neighborhoods along Shelby County 261 expressed relief and approval of the project’s progression.

“Thanks for the patience,” Hayes said, noting the lengthy process since the approval of funding in May.

Although approved by the City Council, the property acquisition is awaiting final approval by the city’s legal counsel before further work can be done on the flood mitigation project.

Veterans’ graves are marked with wreathes during the holiday season at the Alabama National Cemetery. (File) By GRAHAM BROOKS /... read more