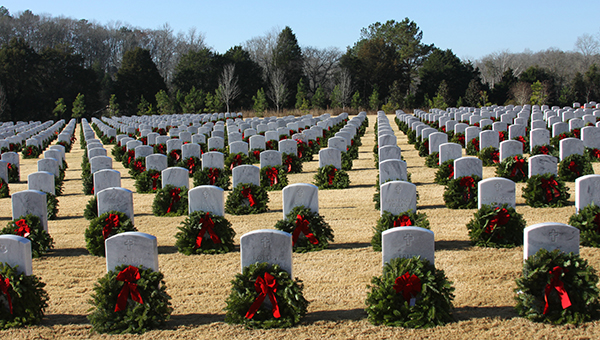 Veterans’ graves are marked with wreathes during the holiday season at the Alabama National Cemetery. (File)

MONTEVALLO–The sixth annual Wreaths Across America will be held on Saturday, Dec. 13 at 11 a.m. in a National Remembrance Ceremony including music, a guest speaker and a bagpiper. The bagpiper will lead widows, family members, friends and patriotic citizens to the various sections for the placement of the wreaths.

The fundraising event gathers sponsors to provide live Maine balsam wreaths for each veteran’s grave each Christmas season at the Alabama National Cemetery.

The bagpiper will be Jeff Jones, Mel Shinholster, president of Blue Star Salute Foundation, will be the master of ceremonies and Lt. General Jim Link, U.S. Army (retired), will serve as the keynote speaker.

The cost of each wreath was $15 and approximately 3,000 wreaths and $45,000 was raised for this year’s ceremony, according to Deputy Commander of Bessemer Civil Air Patrol Bobby Newsome.

“Last year, we had roughly close to 40-50 volunteers unloading boxes off the tractor trailer and straightening them and them loading them onto other trailers,” Newsome said, referring to the time and effort put into unloading and placing the wreaths. “This year, we have picked up about a thousand more wreaths and the whole process takes about three to four hours and then it takes another two hours or so to lay the wreaths the day of the ceremony.”

The program is sponsored by the Blue Star Salute Foundation of Alabama and many volunteers help out as well.

Each wreath honors all servicemen and women for their selfless sacrifice and that of their families who are without loved ones during the holidays.

The Wreaths Across America annual ceremony grew from a tribute that began in 1992, when the Worchester Wreath Company of Harrington, Maine, had a surplus of holiday wreaths and donated them to Arlington National Cemetery to be placed in one of the older sections of the ceremony, according to the Alabama National Cemetery.

The annual wreath-laying ceremony is held in Washington D.C. and all 50 states.

The annual tribute “will promote a week-long series of events designed to raise awareness and appreciation for the sacrifices of our nation’s veterans and their families,” according to the press release.