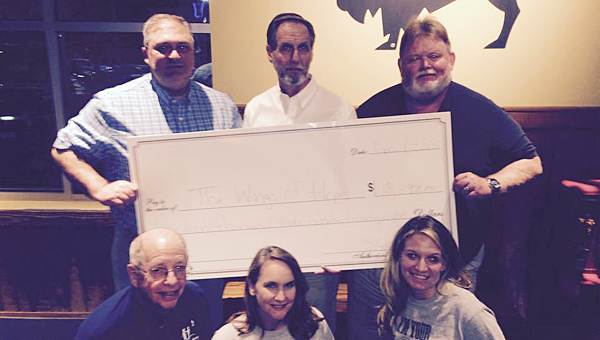 Things are now a little less hairy at several Shelby County law enforcement agencies after many of the county’s cops shaved for the first time in a month on Dec. 1.

And after the final beard was trimmed, the Alabaster, Pelham and Helena police departments tallied more than $13,000 in donations to provide to the Birmingham-based Wings of Hope Pediatric Foundation.

During November, administrators at the three law enforcement agencies allowed their employees to grow beards during November in exchange for donating $50 to Wings of Hope Pediatric Foundation, which provides services to families with terminally ill children. The police departments also solicited donations from local residents and businesses throughout the month.

On Dec. 1, Alabaster’s Buffalo Wild Wings held a No-shave November wrap-up party for the three law enforcement agencies, and donated 15 percent of sales during the party to Wings of Hope.

“Thank you to (BWW Manager) Tim (Spencer) and his crew at Buffalo Wild Wings in Alabaster for hosting and donating 15 percent of the profits from the No Shave Party to The Wings of Hope,” read a Dec. 2 post on the Alabaster Police Department’s Facebook page. “Thank you to everyone that donated.”

During the wrap-up party, officers crowned Alabaster officer Steve Hataway with the “best beard” award and a Yeti cooler.

The contest began in late October after Alabaster Police Chief Curtis Rigney posted a video on the department’s Facebook page challenging the other law enforcement agencies to participate in no-shave November. The video at one point featured the song “Turn Down for What” by DJ Snake and Lil John as Rigney threw down “the gauntlet” in challenging the other law enforcement agencies.

After the contest was over, the trio of police departments thanked the community and their officer peers for supporting a good cause during the light-hearted competition.

“We have been truly humbled by the support we have received from both our awesome business community and individual people who, in some cases, gave us every bit of money in their pockets,” read a post on the Helena Police Facebook page.

“Thanks to those individuals and area businesses that supported our police family and the foundation,” the Pelham Police Department posted. “Not bad for a bunch of hairy cops.”

Thompson Middle School student Will Vickers joins his classmates in painting a mural at the Warrior Center for special-needs students... read more