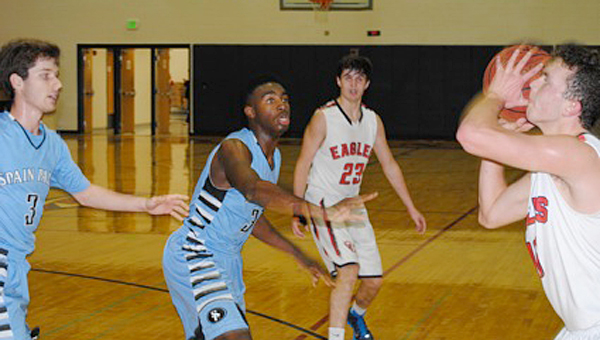 By BAKER ELLIS / Special to the Reporter

Spain Park extended its undefeated season for another game behind strong play from Jamal Johnson, Jameson Floyd and Austin Wiley.

In a game that saw visiting Spain Park take the lead from the opening possession and never give it back to the host team Oak Mountain, there was plenty to take away for both teams. Johnson ignited the Jaguars from the opening tip, squaring up and nailing a three on the first shot attempt of the game, then hitting two free throws to give the Jaguars a quick 5-0 lead. The Eagles had a difficult time adjusting to the full court, man-to-man pressure defense applied by Spain Park, and fell behind 11-0 from contributions from Johnson, Wiley, and Malik Blanchard before Will Stephenson broke into the scoring column for Oak Mountain, making the score 11-2.

As the Eagles adjusted to the style of play, however, they began to claw themselves back into the game off of solid defense and offensive intensity from the likes of Stephenson, Gabe Haynes and Payton Youngblood. The score at the half read Spain Park 26, Oak Mountain 16. The game would have been substantially farther out of reach, had Spain Park’s Wiley been better than 3-12 from the charity stripe in the first half. However, his 6-foot-9-inch frame altered every shot the Eagles attempted in the paint in the first.

In the second half, after foul trouble pushed Wiley to the bench, Oak Mountain rallied to within 5, with the scoreboard reading 28-23 in favor of Spain Park. Johnson then began to assert his presence on the offensive end, driving to the hoop for 2 and hitting a neat 3 pointer in successive plays towards the end of the third. Strong, penetrating guard play by Stephenson and Slade Garmany kept the Eagles close however, down 40-34 after three.

Some sharpshooting from Oak Mountain’s Chris Lamb kept the Eagles hanging around in the last quarter of play, but rebounding woes and the reentrance of Wiley left their comeback attempt short. The Jaguars opened the game up slightly at the end of the fourth, winning the contest 56-49.

Oak Mountain plays Clay-Chalkville next, at home on Dec. 4, while Spain Park will travel to Pelham for their next contest on Dec. 9.