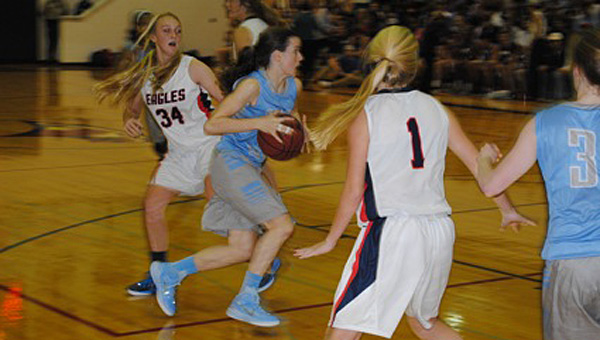 By BAKER ELLIS / Special to the Reporter

What started out as a close contest in the first half turned into anything but as the Spain Park Lady Jaguars downed the Oak Mountain Lady Eagles on Tuesday night.

Spain Park got on the scoreboard first with a made free throw from Elizabeth Philpot to get the evening going. After a first quarter in which Oak Mountain was led primarily by Christian McGowan and Amber Johnson, they were in front of the Lady Jaguars by a score of 9-5.

Oak Mountain came out in the second quarter feeding off their hot start, with a quick three from McGowan and a free throw by Johnson to continue their strong first half showing. Spain Park’s Victoria Baldwin answered with a bucket of her own, and the Lady Eagles were up 13-7. From here, the two sides went back and forth, trading free throws until it was 16-11, Oak Mountain’s lead, with a few minutes left in the first half. Spain Park, however, was able to mount a 5-0 run to end the half, and went in to the break up 18-16. They would not relinquish the lead for the rest of the night.

After intermission, more free throws ensued as Oak Mountain was able to pull even off of three Johnson made attempts to Baldwins’s one for Spain Park to tie the game at 19 apiece. From here, the Lady Jaguars went on a 23-5 run to end the third quarter behind some sharp outside shooting from the likes of Skyla Knight and Alyssa Gaston. This would turn out to be the difference, as Spain Park was able to catch fire at the right time, and Oak Mountain could not match nor contain their ferocious offensive onslaught.

After the third quarter broke the game wide open, the fight went out of the Lady Eagles, with the fourth quarter unfurling no better than the third. Spain Park was able to maintain their offensive efficiency throughout the second half, riding their hot shooting to a 69-31 win.

Spain Park next plays Gadsden City at home on Dec. 8, while Oak Mountain turns their attention to Clay-Chalkville, also at home on the Dec. 5.