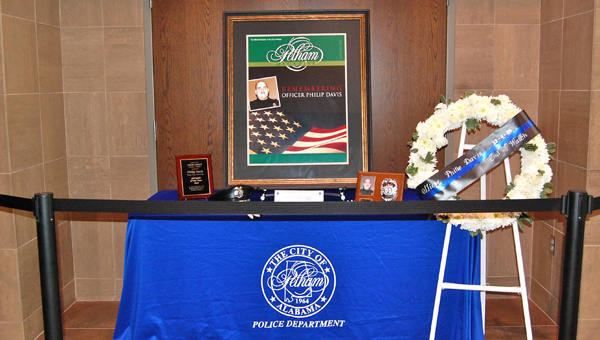 A memorial for Pelham police officer Philip Davis was set up in the lobby of the Police and Courts building on Dec. 3. Davis was killed in the line of duty five years ago on Dec. 3, 2009. (Reporter Photo / Molly Davidson)

PELHAM—Five years ago on Dec. 3, Pelham police officer Philip Davis was killed in the line of duty. Every year since, the Pelham Police Department has set up a memorial in the lobby of the Police and Courts building to commemorate Davis and his service to the city.

“We’ve done this every year,” Pelham Police Department Lt. Davy Lott said. “It’s a simple little memorial in the lobby… (to) remember and pay tribute to him.”

The memorial, consisting of several plaques commemorating Davis and a wreath, was placed in the lobby on Dec. 3 and will remain there until a wreath laying ceremony at Davis’ grave at Southern Heritage Cemetery in Pelham at 2 p.m. on Dec. 7.

“A lot of us worked with Philip for a long time,” Lott said. “It’s a good time to reflect on him and what he meant to the community… and the sacrifice he made.”

Davis was killed shortly before midnight on Dec. 3 after a traffic stop on Interstate 65. He was the first Pelham police officer to be slain in the line of duty. His killer, Bart Johnson, was sentenced to death in June 2011, and currently is incarcerated at the Alabama Penitentiary.

The Thompson soccer boosters are hosting a duck race to raise money for the TMS and THS soccer teams on... read more