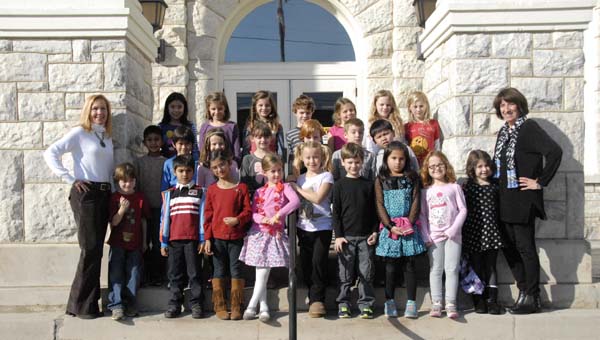 A group of students from Hilltop Montessori School visited the Shelby County Reporter office in Columbiana on Dec. 4 to learn how newspapers are put together. (Reporter Photo/Daniel Holmes)

Students from Hilltop Montessori School in Mt Laurel toured the Shelby County Reporter and The Clanton Advertiser newspaper offices Dec. 4 to see firsthand how newspapers are made.

The students toured the Reporter office in Columbiana and gathered in front of the Shelby County Courthouse for a photo.

“We want to learn how newspapers are made,” Hilltop Montessori student Zack Swalley said.

Next, they watched a staff writer post a story and photo from their visit to the Reporter website and social media.

A graphic designer talked to the students about newspaper design and demonstrated how to design a page of the Hilltop Reporter, a one-time newspaper edition created for the students and their school.

The group left the Shelby County Reporter and traveled to The Advertiser in Clanton to hear the history of the printing press and production plant there.

While in the pressroom, students watched as copies of the Hilltop Reporter were printed for them to take home.

‘Behold the Lamb of God’ tour coming to Valleydale…