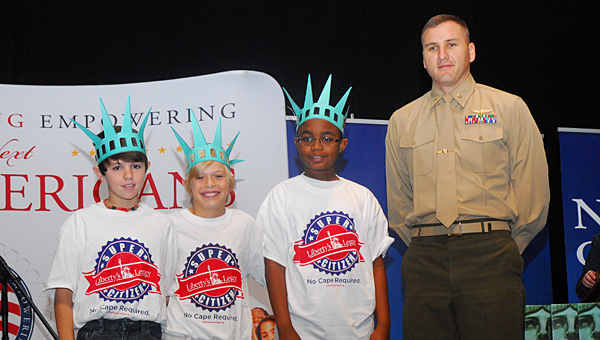 ALABASTER – After being recognized for the second-straight year through the Liberty Learning Foundation’s Super Citizen program, Thompson Intermediate School resource officer Nathaniel Parker had a few words of praise for the school’s students.

“This award means so much to me because it came from you guys,” Parker said during a Dec. 5 ceremony in the Thompson High School gym. “You have no idea how much you mean to those around you.”

Parker was among 18 individuals honored through the Super Citizen program, during which each TIS fifth-grade class formed a “Torch Team” and identified individuals to honor as local heroes. Each person recognized as a “Super Citizen” received small Statue of Liberty statues containing metal from the actual statue.

“By honoring you, they are becoming heroes themselves,” Alabaster City Schools Coordinator of Curriculum and Instruction Cena Davis told the honorees. “This is the second year we’ve had this program, and we’re thrilled to host it again.”

The students honored the following individuals and groups:

-Brandon Green, a training officer with the Alabaster Police Department.

-Michele Williams-Waldrop, who helps those going through physical therapy rehabilitation.

-Alan Davis, an Alabaster firefighter who protects everyone in the community.

-Robert Greene, a K-9 officer with a police department in Georgia.

-Alabaster Mayor Marty Handlon, who “takes such good care of our community.”

-Brian Underwood, a Pelham firefighter who “works every day to keep people safe.”

-Noelle Bowers, who is battling Type 1 diabetes, and regularly works to raise money for the Juvenile Diabetes Foundation.

-Lakitta Bowers, who works in the lunchroom at TIS and ensures children eat correctly.