By JON HARRISON/For the Reporter

“My first experience playing football was in spring training, of my sixth grade year, getting ready for my seventh grade season,” recalls Davis Dudchock, a Shelby County native and Vanderbilt University graduate student athlete who recently completed his last semester of eligibility with the Commodores.

Dudchock began his football career at Oak Mountain Middle School where he started as a quarterback.

“I played three sports through middle school and until my sophomore year and then my junior and senior years at Oak Mountain, I really focused on baseball and football.” Said Dudchock 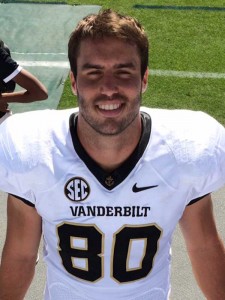 Through focusing on these sports and academics, Dudchock was able to accomplish one of his lifelong goals.

“I had always had a dream of playing collegiate sports and it had been my goal growing up to earn an athletic scholarship to play division one sports,” Dudchock said. “I didn’t know in what sport that would be, but the best opportunity was definitely with football.”

During his senior year at Oak Mountain High School, Dudchock was offered an athletic scholarship to Stanford University.

“It was incredibly humbling and I was very thankful to receive the news,” Dudchock said. “I felt blessed by the opportunity that coach was giving me.”

Dudchock received his bachelor’s degree in science, technology and society, while also receiving a two-year letterman and All-PAC 12 Academic Honors. Dudchock is now pursuing his graduate degree in higher education administration at Vanderbilt University, and during his last semester of eligibility, he played half back and tight end for the Commodores.

Dudchock attributes his success to his roots of hard work, strong faith and a supportive family in Shelby County. He also understands that as a student-athlete he is a role model to many and he does his best to set a positive example and message.

“Playing sports gives you an incredible opportunity to develop as a young man or a young woman, and it has helped me so much,” Dudchock said. “The Lord has granted you with a gift and opportunity to play an incredible game, so take advantage of all opportunities to continue to pursue excellence and to serve the Lord.”

Dudchock plans to graduate from Vanderbilt in 2016 and plans to pursue opportunities in higher education or business.