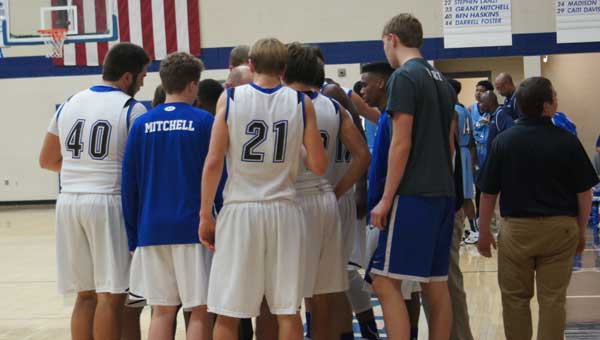 The Chelsea Hornets kicked off the season on Friday, Dec. 5.

By Joseph Antonio/For the Reporter

The expectations have never been higher at Chelsea high school for this year’s basketball season. In fact, the Hornets’ boys’ varsity team is in its best position to win its first area championship since 1986.

First-year coach Nick Baumbaugh, 35, believes that a combination of senior leadership and a culling in area competition is the right recipe for great success this season. Chelsea is now only just one of three teams in their area, along with Oxford and Pell City.

The two players Coach Baumbaugh will rely on most heavily are seniors Darrell Foster and David Simpson.

“Darrell is a guy who can score, rebound and guard the best big men night in and out,” Baumbaugh said. Foster averaged 15-points and 10-rebounds per game last year and Simpson is a terrific 3-point specialist. This combination could prove lethal down the stretch.

Baumbaugh, who is a native of Indiana, is a Hoosier through and through who dreams of putting basketball on as large a pedestal as football at Chelsea High.

“I would love to be able to boost basketball in the community and show that it is a good sport. I want to show that basketball can be successful at Chelsea,” he said.

“I do not look forward to the Pelham game because Coach Floyd and I are such good friends and one of us will have to lose,” Baumbaugh said.

After going 13-3 last year with stiffer completion, Baumbaugh has emphasized how attainable their goal is this year on a constant, daily basis. His players seem to have bought into his philosophy and are pushing themselves harder than ever.

“I’m excited about the opportunity to coach at Chelsea and I encourage people to come and watch us. It should be fun,” Baughbaugh said.

By JON HARRISON/For the Reporter “My first experience playing football was in spring training, of my sixth grade year, getting... read more