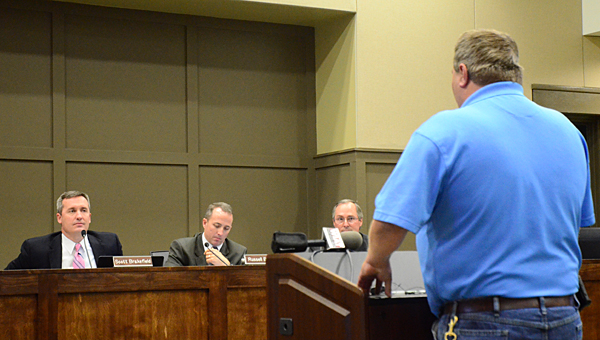 ALABASTER – The Alabaster City Council decided not to ban most parking in residential front and side yards in the city during a Dec. 8 standing-room-only meeting at Alabaster City Hall.

During the meeting, the council voted 5-2 to deny an amendment to the city’s traffic and vehicles ordinance prohibiting parking in front and side yards unless they are on a paved driveway surface. Council members Sophie Martin, Stacy Rakestraw, Tommy Ryals, Russell Bedsole and Council President Scott Brakefield voted against the ordinance and Bob Hicks and Rick Walters voted in favor.

The ordinance would have prohibited parking “any motor vehicle in a front or side yard on any lot or parcel in any residential district on the city that has an existing driveway.”

The ordinance would not have applied to temporary visitors at a residence, vehicles parked in a front or side yard temporarily for loading or unloading purposes or “any vehicle clearly displaying a handicap parking placard or plate.”

If the ordinance would have passed, those found in violation of the parking ordinance by a city police officer would have received a ticket, and must have paid a $25 fine within 10 days of receiving the citation.

The council’s decision came after a public hearing on the matter at City Hall. During the public hearing, three Alabaster residents spoke in favor of the ordinance and 18 spoke against – many of whom applauded and cheered for each other – before Brakefield ended the hearing.

Those who spoke in favor of the ordinance said parking in yards negatively impacts property values throughout the city, and said vehicles parked in yards can obscure vision for other drivers, creating a hazard for children and pedestrians.

Many residents who spoke against the ordinance said they specifically bought homes in areas without homeowners associations so they could do what they wish on their properties. Others said they were concerned the ordinance was an overreach of government responsibility.

Before the vote, Martin and Ryals said they were opposed to the resolution, and said it was not in the best interest of their constituents. Walters said the intention of the ordinance was not to “create a police state to have police out patrolling the neighborhoods.”

“I think this may reach a little further than government was intended to reach,” Ryals said. “A lot of people would be forced to park in the street.