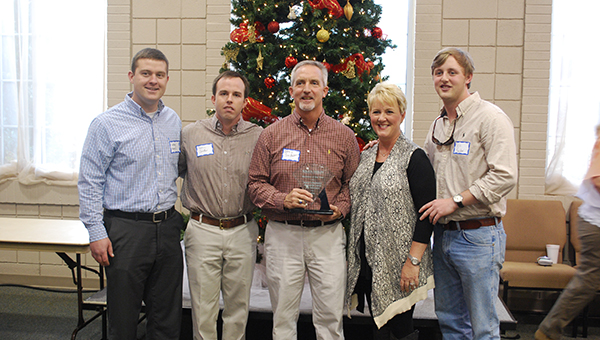 Members of Snider’s Pharmacy and Ground Up Coffee and Smoothies received the 2014 business of the year award from the South Shelby Chamber of Commerce at the Diamond Awards Luncheon on Thursday, Dec. 4. (Reporter Photo/Graham Brooks)

COLUMBIANA–The ninth annual Diamond Awards Luncheon hosted by the South Shelby Chamber of Commerce saw many Shelby County businesses and citizens honored for their hard work in the past year.

The luncheon was held at Columbiana United Methodist Church on Thursday, Dec. 4, and former Alabama football player Bobby Humphrey was the keynote speaker at the event.

“The word I want to drive on is desire,” Humphrey said to the audience. “When you start out doing something, you have a desire and you have a motivation to achieve it and if you never lose sight of your goal, regardless of how long it takes you to reach it, you’re going to get there. Sometimes in the process of trying to reach your goal, there’s some obstacles, but you got to remember that trouble makes you better. Sometimes the rain has to fall for the grass to grow.”

Snider’s Pharmacy and Ground Up Coffee and Smoothies in Chelsea received business of the year, Sheriff Chris Curry won citizen of the year, 99.9 APH FM Radio received the best new business award and Vicki Everett was named the top ambassador of the year.

“I’ve been doing this for 30 years, and when I opened my own business it was just a dream come true,” said Doug Snider, owner of Snider’s Pharmacy and Ground Up Coffee and Smoothies. “This award’s not mine, every business here is business of the year. It takes a lot to open a business and want to have that goal and do those things, but I want my light to shine and I want to be a beacon of light in that community. That people will look to Snider’s not for just drugs or coffee, but for advice and to cry on our shoulders.”

New business of the year nominees included: APH Radio, which stands for Alabaster, Pelham and Helena, Bama Budweiser in Harpersville, SouthPoint Bank in Wilsonville, The Pita Hut in Chelsea and TredWear of Columbiana.