COLUMBIANA – A 37-year-old North Shelby woman is serving a yearlong jail sentence after she pleaded guilty to using methamphetamine and other substances while she was pregnant. 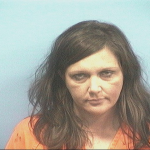 Shelby County Circuit Court Judge Dan Reeves originally sentenced Courtney Elizabeth Smith, who lists an address in the 800 block of Morning Sun Drive in North Shelby, to 120 months in jail in late August, but split her sentence to 12 months in the Shelby County Jail followed by three years of supervised probation.

Smith received 35 days of jail credit for time served in the Shelby County Jail before her sentencing.

The Shelby County Sheriff’s Office arrested Smith on June 16 and charged her with one count of chemical endangerment of a child after Smith tested positive for methamphetamine and benzodiazepine, a psychoactive drug, at Shelby Baptist Medical Center in Alabaster while she was pregnant on May 28.

Smith was released from the Shelby County Jail the same day as her arrest after posting a $10,000 bond, but she was rearrested after failing a drug test in late July, according to court documents.