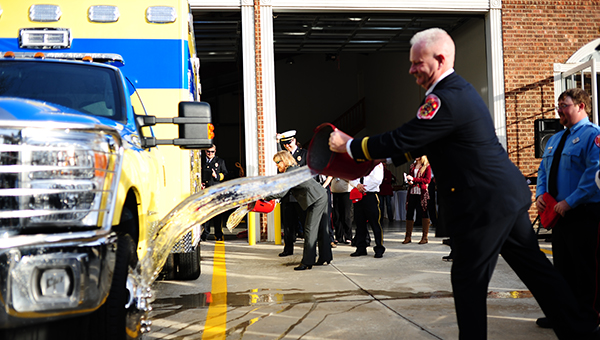 Participants at the ceremony take part in the wet down of the apparatus. The ceremony took place at the Montevallo Fire Department Station 2 on Sunday, Dec. 7. (Reporter Photo/Jon Goering)

MONTEVALLO–The six volunteer fire departments that make up the First Battalion of Shelby County dedicate a lot of time and effort into what they do, and on Sunday, Dec. 7, a new apparatus was dedicated to let the battalion better serve Shelby County.

Rescue 1, a type 1 advanced life support rescue and transport unit was dedicated and made possible through a grant from the Shelby County Community Health Foundation.

The unveiling of the Rescue 1 vehicle took place at The American Village along with a ceremony where several city officials and current and former fire chiefs spoke about the dedication, as well as how far firefighting and times have changed in the last century.

“We are proud and on behalf of your county commission and even more important than us are these men and women who serve us day in and day out,” Shelby County Manager Alex Dudchock said. “We heard an amazing number earlier, it was such a strong number, I went and made sure I understood it by listening to 911 and Kelly about the number of dispatches and the number of calls for requests were at 416 (since September).”

A blessing was made over the new apparatus and firefighters who will come in contact with the equipment laid their hands on the truck while they were prayed over for safety and well-being.

Following the blessing, a practice that dates back to the horse-drawn carriage days was performed. County officials and fire officials were placed in pairs around the truck where they used seven antique round bottom fire buckets to “wet down” the truck before it was housed and ready for use.

Lastly, the “push back” was performed after the truck was dried off and cleaned. This also dates back to horse drawn days. Firefighters did not want to bring horses back out to get the truck dirty again so they pushed the truck back into the station manually using a team effort.

Firefighters, family and friends all came out to watch the dedication of the truck on a sunny Sunday afternoon that officially made Rescue 1 ready for action.

THS band looking for help to make it to…