Sharp shooting behind the arch leads Thompson to victory 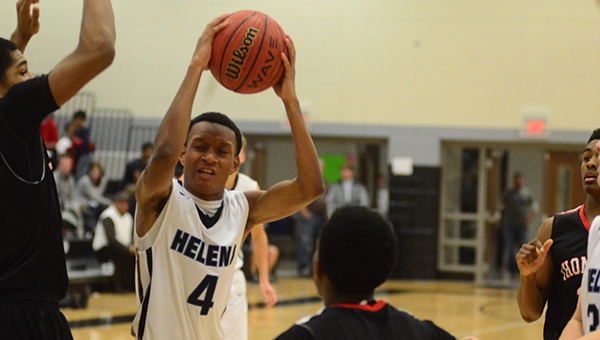 Helena’s Jaylen Harris (4) drives into the lane against Thompson defenders as he finished with 14 points for the game. The Huskies fell at home 71-58 on Tuesday, Dec. 9. (Reporter Photo/Graham Brooks)

HELENA–In a game that Thompson never trailed, three-point shooting was the key to victory as the Warriors defeated the Helena Huskies on the road 71-58 on Tuesday, Dec. 9.

As a team, Thompson finished the game with 14 made three-pointers that never gave Helena a chance to get back into the game.

“It helps when you make shots, we were 9-16 at the end of the first half and I think we played pretty well,” said Thompson head coach Patrick Davis on his teams shooting performance after the game. “Sometimes making shots covers up for things you can’t really tell but we shot it well. It was important for us to do what we do and we felt like we did a pretty good job of that tonight.”

18 of Thompson’s 19 first quarter points came from behind the three-point line as they lead the Huskies 19-14 at the end of the first quarter and Thompson took a 40-29 lead into the half.

What hurt Helena for much of the night was the inability to make free throws. The Huskies finished just 8-18 from the line.

Helena’s leading scorer was Jon Brown who finished the game with 18 points. The Huskies trailed by as many as 20 points but kept fighting the whole game to try and come back but lack of made free throws could not make it possible.

Davis was proud of the way his team came back and played after losing their last game to rival Pelham.