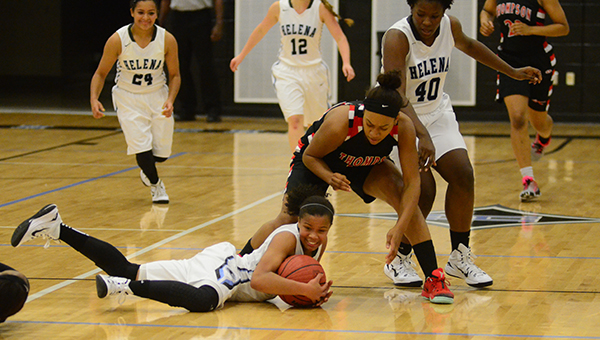 HELENA–The Thompson Lady Warriors have rebounded strongly after losing their opening game of the season and notched another victory beating the Helena Lady Huskies 56-5 on Tuesday, Dec. 9.

The Lady Warriors continued to play solid defensively as they held Helena scoreless at the end of the first quarter and just five total points in the game.

“We lost our first game at Jeff Davis and were 10-1 now and have won ten in a row and playing pretty well but there’s always stuff to work on,” said Thompson head coach Josh Golden after the game.

Brittany Grice led Thompson in scoring finishing with 10 points in the game.

A scary moment in the game came with 4:40 remaining in the third quarter as Thompson’s leading scorer Janese Richardson went down in pain holding her ankle.

Richardson left the game and did not return, finishing with 9 points.

Golden addressed the injury after the game and is optimistic it will not be too serious.

“I hope it’s just a sprained ankle, she’s our leading scorer, she averages right at 15 points per game and is a huge part of what we do,” said Golden. “She was able to put some pressure on it when she left the floor so were going to ice it today and tomorrow and see how it feels.”

The Lady Huskies seemed rattled the entire game by Thompson’s defensive pressure and just couldn’t muster any offense as they look to rebound after a tough night at both ends of the floor.

The Lady Warriors will go for their eleventh win a row on Dec. 11 as they get a rematch with Jefferson Davis in Montgomery while the Lady Huskies will face Jemison at home on Dec. 12.

Kelsea Bivins (32) of Thompson looks to pass the ball. Bivins finished with 12 points and the Lady Warriors defeated... read more