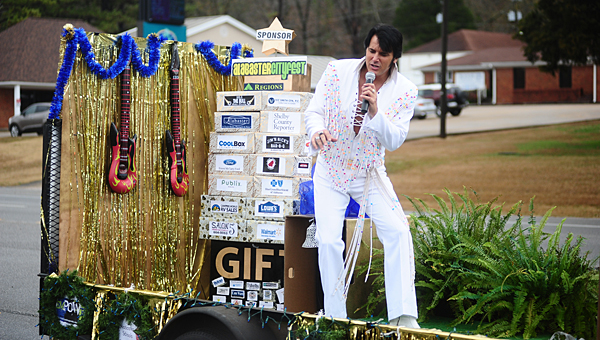 Terry Padgett impersonates Elvis on the Alabaster Arts Council’s float in the 2014 Christmas parade. The float was named the parade’s most entertaining. (Reporter Photo/Jon Goering)

ALABASTER – The Alabaster Parks and Recreation Department had a tall task naming only a few winners out of the dozens of floats in the city’s Christmas parade on Dec. 6, but the department was able to whittle it down to five champions.

Thousands of spectators braved a rain-soaked morning to attend the Christmas parade, which began at the Ernest McCarty Ford dealership on U.S. 31 before turning right onto Second Place Northwest, traveling down First Street Southwest and ending at the stop sign in front of Southbrook Village. Though heavy rainfalls plagued the area in the hours leading up to the parade, precipitation ended before the first float began rolling down U.S. 31.

As floats and walking groups approached the former City Hall building on U.S. 31, a group of judges determined the best entries in several categories.

The Alabaster Arts Council float, which featured Terry Padgett as Elvis singing a slew of holiday hits and a Christmas tree thanking the sponsors of the Alabaster CityFest, was named the most entertaining float.

Pelham Church of God won the “Best Use of Theme” award for embodying the parade’s “The Gift of Christmas” theme.

Former U.S. Army Sgt. Noah Galloway, an Alabaster resident, was the parade’s grand marshal, and led off the celebration from his custom black Jeep Wrangler.