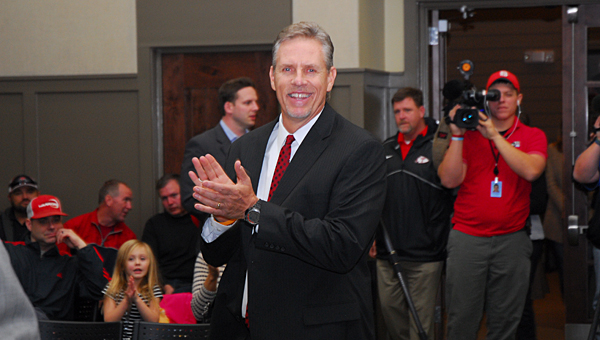 The Alabaster Board of Education voted unanimously during the meeting to name Freeman to the positions. Freeman will make $121,000 per year in the roles.

The vote came a few days after Freeman resigned as the head coach and athletic director at Spanish Fort to take the helm of the Thompson Warriors.

“We looked for someone who was a champion. He has six state championships,” Alabaster School Superintendent Dr. Wayne Vickers said after the hire. “Not only will he help us be champions on the field, he is going to help our young men and ladies be champions in life.”

Freeman will take over from former THS head football coach Michael Montgomery, who was terminated from the position in early November after three years as the Warriors’ coach and a winless 2014 season.

Freeman brings with him one of the strongest records in the state over the past few years. Freeman served as the head coach at Spanish Fort from 2011 until his resignation, and compiled a 50-7 record over his four-year tenure with the Toros.

Freeman led Spanish Fort to back-to-back Class 5A state championships in 2012 and 2013, and the Toros went into at least the third round of the playoffs each year he was head coach.

Spanish Fort moved up into Class 6A before the 2014 season, and Freeman recorded a 12-2 season and a trip to the 6A playoff semifinals in his final year as head coach at the school.

Before coaching at Spanish Fort, Freeman recorded a 101-21 record and four Alabama Independent School Association state championships at Bessemer Academy. In 2008, he served a stint as the quarterbacks coach at Minor High School before he was named the Gulf Shores High School coach for the 2009-2010 season.

“I hope this sends a message to all the schools in our area that we are serious about athletics just like we are academics,” ACS Operations Coordinator Dr. Jeff Atkins said.