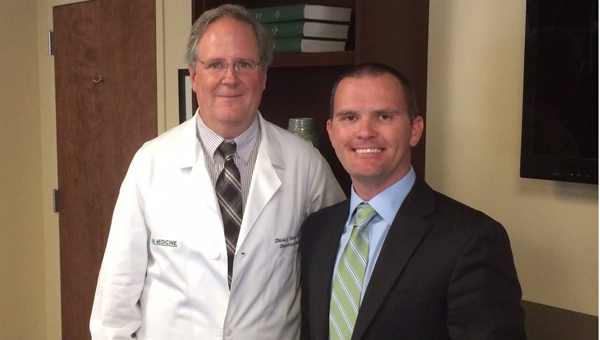 Dustin Chandler, right, with chair of the UAB Neurology Department Dr. David Standaert, left. UAB is leading a study of possible benefits of CBD oil in the treatment of seizure disorders, which could begin in February. (Contributed)

PELHAM—Those awaiting treatment in the Carly’s Law study got big news on Dec. 9 when University of Alabama at Birmingham doctors received “may proceed approval” in a letter from the Federal Drug Administration, Pelham Police officer and driving force behind Carly’s Law, Dustin Chandler confirmed.

The UAB study to test the possible benefits of cannabidiol in the treatment of severe seizure disorders still must receive approval from the Drug Enforcement Agency and UAB’s Institutional Review Board before any treatment can be administered. However, the university said treatment could begin in the coming months.

According to the university, the IRB will meet and discuss the study in early January, and plans for the study could be approved by the end of January.

The university also confirmed officials are working on contracting with a vendor to supply CBD oil for the study, and arrangements may be finalized as early as February.

The study into CBD oil for the treatment of seizure disorders was made possible by the April 1 passage of Carly’s Law and was originally projected to begin this past fall. However, delays in approval from groups such as the FDA pushed the target start date back.

“What I do know is I wish this could have happened back in October,” Chandler said, expressing frustration at what appeared to be a “hang up” in the process to get FDA approval for the UAB study.

The possibility of CBD oil treatment provides hope for many individuals suffering from seizure conditions and their families throughout the state. For Chandler’s daughter, Carly, CBD oil treatment could mean relief from the severe seizures caused by CDKL5, a rare neurological condition with no known cure.

Chandler organized a social media campaign, encouraging supporters of Carly’s Law to contact their local state and federal representatives and make them aware of the status of the Carly’s Law study.

“We got a social media campaign going again… it was really just parents calling about their children,” Chandler said. “Sometimes the people’s voice needs to be heard again.”

“The biggest hurdle we had to get over was the FDA,” Chandler said. “I feel pretty confident about (the timeline) now.”