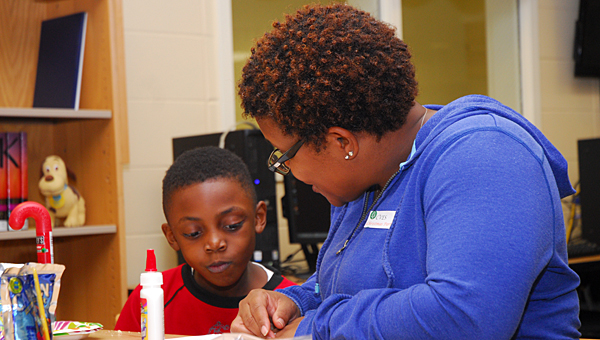 ALABASTER – Sometimes, all it takes is a few wooden popsicle sticks, glue and a packet of Capri Sun to begin a journey to change a child’s life.

“I just want to be a part of making a child’s life better, especially when they need someone there for them,” first-time Big Brothers Big Sisters mentor Rani Crear said after she met her first Little Brother, Keelan Howard, in the Creek View Elementary School library on Dec. 15.

Howard joined two of his classmates in meeting their Big Brothers Big Sisters mentors at the school during the ceremony, which was attended by several Alabaster City School System employees, local business owners and Alabaster Mayor Marty Handlon.

The event marked a big day for Big Brothers Big Sisters of Greater Birmingham, which recently expanded into Shelby County and opened a new office in the city of Alabaster’s depot building in October.

“It was so important for us to make our first match with Alabaster City Schools and celebrate that partnership, especially with us having an office in Alabaster now,” said Big Brothers Big Sisters Shelby County Director Kim Egan.

“I asked him about what he is interested in, and if he likes sports. I’m a big sports fan, so I wanted to try to connect with him there,” Crear said. “The next time I’ll see him will be after Christmas, so we will talk about Christmas next month.”

Through the program, the adults will serve as role models for the children over the next several months, and will regularly meet with them at the school. In January, a few more of the city’s elementary school students will be matched up with mentors from Thompson High School through Big Brothers Big Sisters’ school-based program, Egan said.

“We’ve had a dream for this program to come to ACS for over a year now,” said ACS Student Services Coordinator Dorann Tanner. “It’s the ultimate preventative tool. If the kids are engaged, they will want to come to school every day.”

Teachers learn to code at VIS