Alabaster Aldi opens its doors: Who was the first customer? 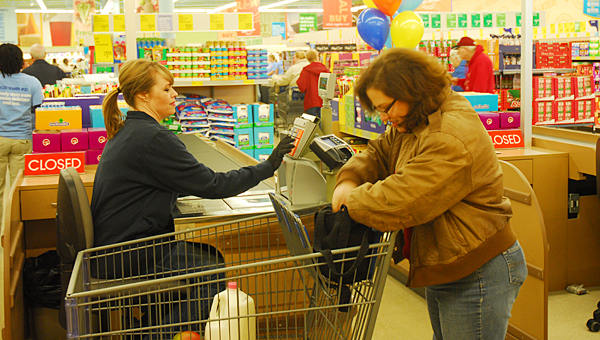 Laura Ralph, right, was the first person to check out at the new Alabaster Aldi grocery store, which opened its doors on Dec. 17. (Reporter Photo/Neal Wagner)

“I knew it was going to be busy this morning, so I only grabbed a few things,” Ralph said as she held a gallon of milk and a single piece of fruit a few minutes after the store opened its doors for the first time on Dec. 17.

Out of the dozens of shoppers lined up to enter the store after the ribbon was cut at 9 a.m., Ralph was the first to make it to the checkout line, and exited the store while traffic began to back up on Simmsville Road to get into the Aldi parking lot.

“I like Aldi, and I really just wanted to see the grand opening event,” Ralph said after she checked out and entered a sweepstakes for free groceries.

The grand opening of the 17,651-square-foot grocery store at the corner of U.S. 31 and Simmsville Road was Aldi’s second in Shelby County after the company opened its Pelham location in 2011. Aldi now operates eight locations throughout the Birmingham metropolitan area.

The Alabaster location will be open from 9 a.m.-8 p.m. Monday through Saturday and from 10 a.m. to 7 p.m. on Sunday. The store will accept cash, debit and EBT/Quest cards.

Alabaster Mayor Marty Handlon said she was impressed to see such a crowd gathered for the store’s first day of business.

“I’m excited to see all of y’all here this morning,” Handlon said before she helped to cut the ribbon. “I’m not going to waste time talking, because I know y’all are ready to shop.”

Aldi stores have several differences from many other area grocery stores. Aldi offers limited name-brand products, relies heavily on its own store brands and rents shopping carts to customers for 25 cents. Customers can also bring their own shopping bags from home or purchase bags from the store.

Aldi Vice President Troy Howard said the company is excited to expand its presence in the Birmingham market, and said the store was offering some deep discounts in honor of its opening day.

“We are excited to be here today,” Howard said. “We have a lot to offer to our customers.”

Legacy Gymnastics in Pelham trains both boys’ and girls’ competitive teams. Members of the girls’ levels 3, 4 and 5... read more