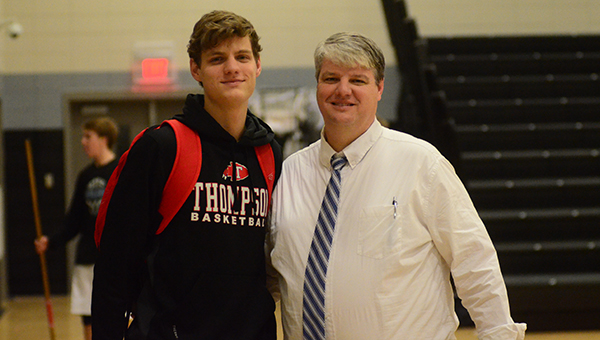 William Laatsch and his father Chris Laatsch met on the basketball court where they talked about the experience of playing against each other for the first time. (Reporter Photo/Graham Brooks)

HELENA–William Laatsch has grown up playing the game of basketball and was accustomed to the sound of a familiar voice on the sideline, that being his father.

That has now changed this season after William and his family moved to Helena from Briarwood.

William’s father, Chris Laatsch, was the head boy’s basketball coach at Briarwood High School for 16 years before moving to Helena to take the same position.

Chris and his wife Leigh have seven children and basketball has been a big part of their lives.

Two of William’s brothers grew up playing for their dad at Briarwood and William was planning to do the same. Once they moved, the Alabama High School Athletic Association rules prevented William from being on the Helena High School basketball team due to his father being the head coach.

Because of that rule, William has spent his senior year playing a couple miles down the road for the Thompson High School basketball team and head coach Patrick Davis.

On Tuesday, Dec. 9, Thompson and Helena met for the first time this season with William getting best of his father as Thompson pulled out a 71-58 victory.

“It was probably the weirdest thing I’ve ever had to experience,” William said after the game. “I’m always used to learning from him and playing for him, always used to looking to him for the calls and it created a special bond we always had. It’s been kind of tough going through what I’m going through but Coach Davis at Thompson is good friends with my dad and he’s made that adjustment really easy so it’s been good but definitely different.”

Chris has a good relationship with Davis and knew he wanted William to have a good experience playing basketball his senior year.

“I think the world of Patrick Davis, I think he’s a great man, I think he’s a great coach so if I was going to share my son with somebody I was glad to do it with him,” said Chris. “I wanted my son to have a great senior year basketball experience. If we couldn’t be together due to the AHSAA rules we wanted to find a place that would be a good place for him to have a great senior year experience.”

Thompson and Helena will meet again on Jan. 26 at Thompson High School where it will be William’s senior night.