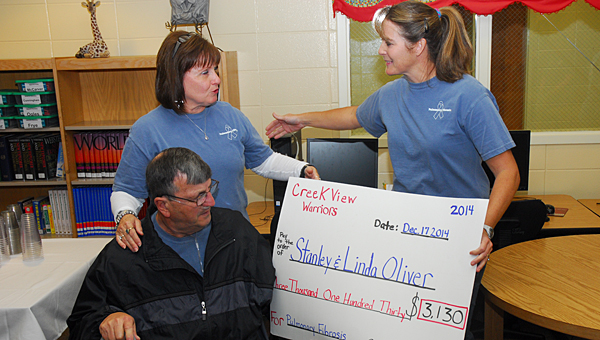 ALABASTER – Creek View Elementary School secretary Linda Oliver knew something was afoot when the school started selling T-shirts in honor of her husband, but she was overcome with emotion when she learned the depth of the community’s support on Dec. 17.

“Y’all have been so supportive,” Oliver said as she choked back tears during an afternoon ceremony in the school’s library. “It’s been so tough to see him go through all of this, but seeing y’all every day makes it so much easier.”

The rare disease causes high blood pressure in the arteries of the lungs, and the disease can lead to extensive scarring and, eventually, non-functioning lungs.

With the help of the school’s faculty, the community and Alabaster Pediatric Dentistry, the school’s teachers were able to present the Oliver family with a $3,130 donation during the Dec. 17 ceremony to help offset medical bills.

Last summer, the family was referred to the Cleveland Clinic in Ohio, and visited the facility in August for tests, Linda Oliver said. Today, Stanley Oliver is in the process of getting on a waiting list for a double lung transplant.

“On November 25, (the Cleveland Clinic) got all the medical records from UAB. The physicians are going to review it now and decide whether or not to put me on a waiting list for a transplant,” said Stanley Oliver, who now breathes with the help of a portable oxygen machine. “Hopefully after the first of the year, we can get up there and get things going.”

In addition to the donation, the teachers donned their T-shirts supporting the Olivers, and presented Stanley Oliver with a signed cutout of the “Flat Stanley” book character.

“It means the world to me to see all the teachers walking around in the hall with the shirts on,” Linda Oliver said. “It lets me know that everyone here is supporting us.”