ALABASTER – A 38-year-old Calera woman is facing a felony child endangerment charge after she allegedly consumed methamphetamine while she was pregnant. 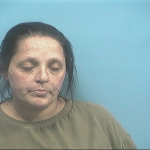 The Alabaster Police Department arrested Lucy Diane Campbell Howell, who lists an address in the 11000 block of Alabama 25 in Calera, on Dec. 16 and charged her with one felony count of chemical endangerment of a child where a controlled substance is produced.

Her arrest came after she allegedly “ingested methamphetamine while she was pregnant” over the past several months, according to her arrest warrant. When the child was born on Dec. 10 at Shelby Baptist Medical Center in Alabaster, the baby tested positive for meth, according to the warrant.

As of Dec. 17, Howell was being held in the Shelby County Jail on a $5,000 bond. She had no attorney or upcoming court date listed in court documents.

Chemical endangerment of a child is a Class C felony. If convicted, Howell could face up to 10 years in prison.

Alabaster Aldi opens its doors: Who was the first customer?

Laura Ralph, right, was the first person to check out at the new Alabaster Aldi grocery store, which opened its... read more